pdf
ON THE COVER:
Hideaway
news 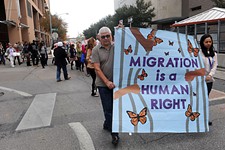 Point Austin: In Defense of the Public Square

Council members ask for money for transit improvements for their districts

Talk, For Sure. But Action?

Groups rally in the wake of open carry

Why have major TV networks pulled the plug on Bernie? The lack of fine dining in Austin isn't just about cost

A descendant of the father of our country in the Antone's House Band? For three decades now, believe it!

Mediterranea puts a real face on a topical subject

All You Need Is Pag-ibig

Charlie Kaufman goes inside the minds of puppets

13 Hours: The Secret Soldiers of Benghazi

PrintAustin: Inking Out Loud with Cathy Savage and Elvia Perrin

For their new Austin Chamber Music Center collaboration, the pianist and composer crank up the reverb but good

Page Two: "Your Job Is to Get the Paper Out"

On the road from Tel Aviv to Jerusalem, overwhelmed with wonder and the terrible history