Point Austin: Moths to a Flame

If it's Friday, we have a budget

Public Notice: It Doesn't Get Easier

Council gets no rest after marathon budget sessions

Trump is a buffoon, but what do we call his copycat rivals?

Nine-year-old twins suspect that someone is impersonating their mother

Faith-based film taken from bestseller is directed by Michael Polish

Hang on for the second act of this Oh Dragon Theatre thriller – then hang on!

"Frank Reaugh: Landscapes of Texas and the American West"

On celebrating the Best of Austin, and learning to live with the worst

For those willing to believe in the impossible, anything is possible 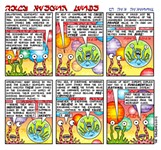