Local groups work to "rescue" food from loss and landfills

Things you can do

Everywhere you turn, the issue is water

Council: Hello, I Must Be Going

The D6 CM is the lone "no" vote on Cardinal Point

Obama's planned expansion of DACA and DAPA on hold

The Hightower Report: Why Are Taxpayers Subsidizing Corporate Crime?

Tough on crime, unless it's corporate

Local groups work to reduce, redistribute, and "rescue" food from loss and landfills 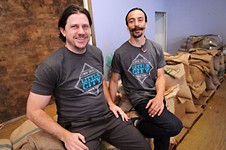 An icon makes a big comeback

Taco Flats is maybe too laid-back

On the Cheap: Taquito Aviles

Getting our goat on Braker

The icing on the cake 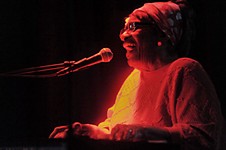 Announcing the 2014/15 Austin Music Awards bill, the 13th Floor Elevators reunite for Levitation, and King Coffey recovers after being struck by a car

A business meeting goes well, but there's no follow-through. "Help Desk" to the rescue.

This Mexican hit tells a heartwarming story about a teen who's forced to rely on the kindness of strangers when he travels to Germany to find work.

Despite heavy sports-underdog cliches, this film with Kevin Costner as the coach of an all-Latino high school track team taps into a lot of modern realities.

Song of the Sea

From the director of The Secret of Kells comes this lovely work of animation about the Celtic selkies.
arts & culture Sean Ripple on "Tom Sachs: Boombox Retrospective" and the rising role of the artist-curator

This G.B. Shaw comedy is typically dense with dialogue, but the student actors at St. Edward's manage to keep tensions high

Gay Place: OUTside of Society, Indeed

OUTsider: And so it begins

The Good Eye: Tales From the Beauty Box

A proud ship and a unique classroom