It's not Ebola that's killing Texans – it's ruthless politics

How could we be so stupid?

HB 2: A SCOTUS Pause Before the Next Storm

Patients, clinics struggle with the impact of legal rulings

Council: The Next Code is CodeNEXT

Buy Yourselves a Ride – Legally!

Environmentalists can see where candidates stand

Appeals denied for Paredes and two others

Houses of the Unholy

Housecore Horror by the blurb

A trio of Australian detonations

Slaves to the Grave

Hammer of the Witch

The Flatlanders: Now It's Now Again

2am at the Cat's Pajamas

Jazz in the life and night of a 9-year-old

I Love You Too

What to see at the 21st annual Austin Film Festival

What to do at the writers' conference

Birdman or (The Unexpected Virtue of Ignorance)

A Hollywood star falls to earth with mad, exhilarating results.

Mathieu Amalric directs and stars in this Hitchcockian story of l'amour four.

This idea-packed comedy pokes holes in the notion of a post-racial America.

This found-footage horror film shot in Austin finds a Bigfoot chased from its home by the Bastrop fires.

The son of a Hamas leader becomes an Israeli spy and searches for a moral center.

Keanu Reeves and the filmmakers deliver the goods in this well-constructed revenge picture.

Actor Dylan Baker debuts as a director with this inspirational film about a blind, young football player.
arts & culture 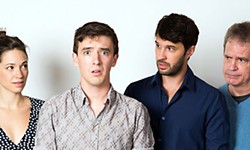 All Over Creation: Identity Crisis

In the midst of autumn festivals aimed at lovers of music and film, here's one for the readers

Lawrence Wright's Thirteen Days in September tells how Carter, Sadat, and Begin made an impossible peace

The Zone of Interest

Martin Amis revisits the Holocaust in this new novel, which is eloquent and yet lacks depth

Merritt's Tierce's novel isn't for the faint of heart, but it tells of a young woman's survival with boldness and power 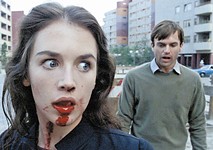 The Good Eye: A Woman Possessed

Was she wrong to go all Isabelle Adjani on New Yorker book critic James Wood?

Re-creating a slice of the Texas Hill Country

The Luv Doc: Something Vaguely Comprehensible