BY MAC MCCANN AND MICHAEL KING

Urban rail may be going off the tracks

Then There's This: County Folds on Tax Fight

Robert Rodriguez's network to use Austin as corporate HQ

Council: Everything That Fits

Is it smart to connect smartphones with smart homes?

Enjoy fútbol with international style and comfort at these restaurants

Huzzahs for local restaurateurs, plus comings and goings 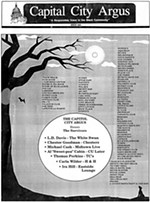 Where have all our black clubs gone?

This Dutch film is a darkly nuanced fable that keeps us consistently off-balance.

For No Good Reason

The artist Ralph Steadman, best known for his illustrations of Hunter S. Thompson's books, is profiled in this documentary.

How to Train Your Dragon 2

You'll want a dragon of your own after seeing this animated sequel that surpasses the original.

Concisely but with great depth, this Polish film explores questions of individual and national identity.

A trio of tech-savvy twentysomethings get waylaid and wind up as subjects in a weird but stylish sci-fi mystery.

Austin's voice in the global conversation on art and social media

Gregory Moss' play turns out be about something much greater than punk: teens' search for identity

'Susan Collis: I would like to invite the viewer' 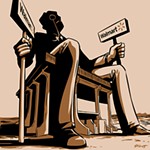 Despite the illusion of autonomy, we have been colonized by the Oligarchy

The Good Eye: Professionalism vs. Fashionalism

The Big Thicket survives at Larsen Sandyland Preserve near Silsbee

The Luv Doc: A Thousand Suns

It is the time for a 'Dear Abby' type column

Where to watch World Cup games in Austin