Early campaign features a lawyer, a Council member, a rancher, and a mechanic Randall Stephens: 'I Can Handle the Job'

On the wars that never end all wars

Then There's This: The 'Witch Hunt' of a Commissioner

Council: From Dollars to Chemtrails

CMs hunker down during budget – and campaign – season

Samsung apologizes, only not really
food To Be or Not to Be (a Gastropub)

A respite of rock & roll reading

Cactus Burning: Austin, Texas and the Battle for the Iconic Cactus Cafe

A nasty business in toto

Zeppelinesque hammer of the gods

Singing Shakespeare tunes around the campfire

Please Be With Me: A Song for My Father, Duane

One Way Out: The Inside History of the Allman Brothers Band

Kentucky Traveler: My Life in Music

Okie from Muskogee still waiting for his alt.country crosser

I Never Met a Story I Didn't Like: Mostly True Tall Tales

All too true tales of the music business

Overweight Sensation: The Life and Comedy of Allan Sherman

A Man Called Destruction: The Life and Music of Alex Chilton

Elvis Died for Somebody's Sins but Not Mine: A Lifetime's Collected Writing

He died onstage, not on the page

Words Will Break Cement: The Passion of Pussy Riot

There Goes Gravity: A Life in Rock & Roll

Once upon a time, writers used to be the tour documentarians

Liz Phair broke a lot of strings – and Kanye, from bootstraps to bootlickers

The Haçienda: How Not to Run a Club

Here Comes the Night: The Dark Soul of Bert Berns

The man wrote 'Hang On, Sloopy' for God's sake

The Smell of Death

Taking the Temperature of 'Cold in July'

The film based on Joe Lansdale's novel, 'Cold in July,' is a gnarled tale of modern horror

Cannes and the art of getting there

A large extended family becomes the natural, yet sometimes awkward outgrowth of modern-day relationships In this romantic piece from France.

Marion Cotillard and Joaquin Phoenix star in James Gray's latest New York opus, a story about a woman turned out from Ellis Island to fend for herself on the mean streets of New York.

A Million Ways to Die in the West

Seth MacFarlane furthers his Hollywood onslaught with this Western spoof in which he's no longer strictly a voice talent but is now playing the onscreen lead.

Gia Coppola, the latest voice heard from in that ridiculously talented filmmaking family, makes an auspicious directing debut with this teen drama based on stories from a collection by James Franco.
arts & culture

Once There Were Six Seasons

'A Secret Affair: Selections From the Fuhrman Family Collection' 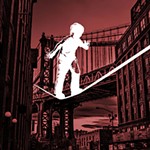 Letters at 3AM: Hitting the Street

Gay Place: Where The Girls Go

The Good Eye: Where Everybody Sews Your Name

A sobering advertisement for birth control