e-edition   |   pdf
ON THE COVER:
Last Day of Summer
news 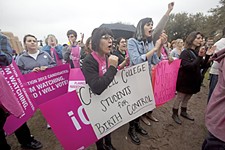 From 'Abstinence-Only' to Plan Z

While our leaders fiddle a manufactured crisis, the land is burning

Then There's This: Dog Days of Parks and Rec

A governor's race with lots of buzz

City Council: No Tubes for You!

Tubing, 24-hour bike trails, and zoning on this week's agenda

Death Watch: One Inmate Gets Reprieve, Another Granted Hearing

The agonizingly slow pace of a fast-food giant

HD 50: How Many Dems Does It Take to Hold a District?

With its second location, Wheatsville expands its cooperative mission

Eclectic eats at a trailer court close to the ACL action

While one of the characteristics of umami is subtlety, Umami Mia Pizzeria is anything but
music

Ghosts in the Attic 'Don't just sit there!' implores Polari, giving us every reason to

Reviews You Can Use

Find the gray area in 'The New Black,' or explore sweeping panoramas and unbridgeable divides in 'The Most Fun I've Ever Had With My Pants On'

'Interior. Leather Bar.' highlights what it's like to be an extra in an explicitly gay film

Austin woman among those to be featured on PBS' 'Genealogy Roadshow'

After the assassination of Dr. George Tiller, what's life like for the 4 remaining doctors who perform late-term abortions in this country?

Tom Hanks is at his best in this multidimensional thriller that grabs real life by the throat.

Shot guerrilla-style at Disneyland and Disney World, this surreal drama about a man's mental disintegration at "the happiest place on Earth" lands a spitball in the Mouse's eye.

A talented Christian teen must choose between her faith and superstardom.

A Princeton student and online gambler gets entangled with the operation's devious mastermind in Costa Rica.

We Are What We Are

Life lessons from the mortuary to the theatre

A Journey Through Hell

Óscar Martínez talks about riding the rails through Mexico to America

'Right There: A Hedonic Map of Pleasure and Pain in Austin, Texas'

This Fifties suspenser shows its age in UT's production, which never quite generates all the suspense it could This week, Polari zhoooshes our town

Big Tex is back and more fire-resistant than ever

What is WRONG with people?!?!?