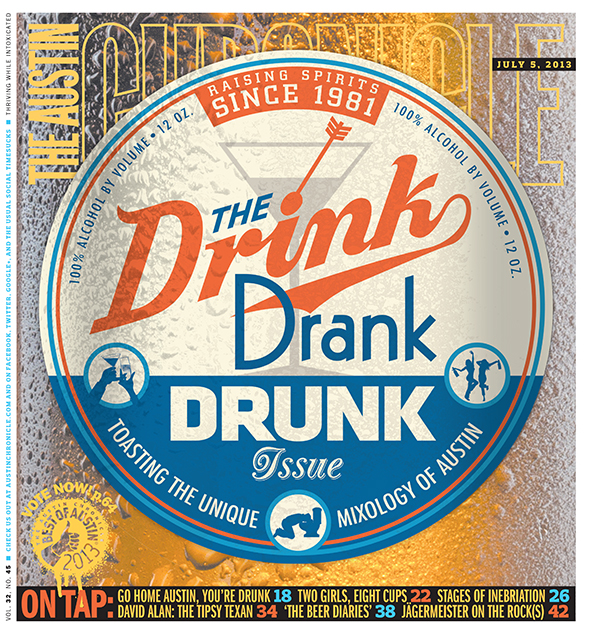 Who Says You're Drunk?

Point Austin: Quality of Life for All

Then There's This: Anne McAfee Stands With Women

Thousands rally at the Capitol

Council: Plenty More Where That Came From

AISD: No Partner Benefits ... for Now

District says decision is a delay not a reversal

His Cup Runneth Over

Tipsy Texan David Alan is having the time of his life

Love Texas? Love cocktails? This is your book.

Downtown's Micheladas has much to offer – including no wait

Jägermeister and music go together like clubbing and hangovers

Octopus Project returns – with vocals! Plus, inside the foliage at Austin City Limits.

Trouble Will Find Me

Wakin on a Pretty Daze

Diaries of 'The Beer Diaries'

Two guys, 12 episodes, and more lucky circumstances than you can count

Everything I Need to Know About Drinking I Learned From Hollywood

Relying on TV and film for drinking tips

Gru exchanges supervillainy for domesticity in this sequel, although the Minions are still the animated film's best selling point.

The Lone Ranger is a Western without a compass.

This film is an extended hosanna to an undersung artist, the backup singer, and what a joyful noise it makes.

Vanessa Redgrave and Terence Stamp bring vitality to their roles in film otherwise filled with cliches about aging and the curative power of singing your heart out.
arts & culture

Why Austin theatres are adding mixed drinks to the mix, offstage and on

Austin Playhouse's take on this chamber musical features a wealth of talent, but the staging is static

Shit gets real at the Blanton's new exhibit
columns

After a Fashion: A Stitch In Time

Fort Lonesome will not be lonely for long

Learn about the earliest people in the Americas

The Luv Doc: Five Drinks That Changed My Life