pdf
ON THE COVER:
Angst Is Their Co-Pilot
news 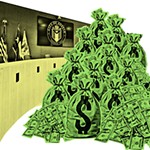 As the economy improves, Council looks toward next year's budget

Shadow of PUC hovers over Austin Energy and city budget

Save Texas Schools builds a groundswell for public education

Then There's This: Another Swipe at Austin Energy

Rob Spillar and transit advocates work toward a 2014 rail vote

Speed Bump on the Rocket Docket

And disapprove of 2011 fam-plan budget cuts

Let's give our weary Earth a break 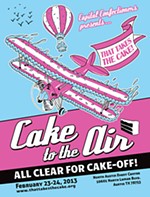 Wine of the Week: Zinfandel From Australia? Why Not? 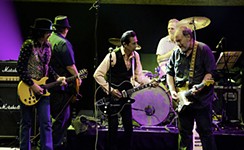 The return of the True Believers

On the Dance Floor

Living for a Song: A Tribute to Hank Cochran

Angst Is Their Co-Pilot

I See a Darkness

Mike Aho and Will Oldham examine 'The Lonely Life'

This honest, earnest, and naturalistic kids’ story about growing up Mexican-American in 1940s New Mexico is based on the popular book.

In this 3-D animated movie, a famous astronaut from another planet becomes trapped on Earth – aka the Dark Planet. Interplanetary shenanigans ensue.

This gorgeously shot documentary impression of three teenagers in Santa Clarita, California, effectively captures the sensation of youth on the verge.

A socially conscious action adventure that stars Dwayne Johnson, Snitch is an indictment of our federal minimum-punishment guidelines for drug offenses.
arts & culture In Poor Shadows of Elysium's Richard II, a coin makes all the difference in what you see

'Beauty Is the Best Priest: Short Plays of the Harlem Renaissance'

'Interior Landscape of the Emotional Mind'

Letters at 3AM: The Future Loose Amongst Us

Digitalized fabrication changes everything we know about work and government

After a Fashion: Just Another Day?

Your Style Avatar has found a new love ... same as the old love

Advocacy summit, Trans Lobby Day at the big pink dome, and so much more, Sunday and Monday.

Why people swerve into you unexpectedly