pdf
ON THE COVER:
Two Sides to His Story
news

Going With the Flow

The next life of Waller Creek

Point Austin: Backstage at the Circus

The Lege melodrama can be a hard act to swallow

Then There's This: Solar for Lease

It just got easier for nonprofits to afford to go green

Scenes from the floor of the Texas House and Senate

Council Preview: A Bar on Burnet?!?

Neighbors aren't pleased with Little Woodrow's plan to move in

Under the Bus: Next Stop at the ATU

The Hightower Report: Fruitcake of the Year for 2012

Why brewheads are buzzing about Pinthouse Pizza's head brewer from Colorado

The craft brews are solid, but the pies are still evolving
music 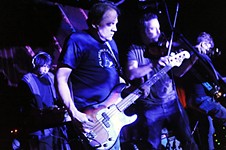 Toasting My Education and its dearly departed

Digging up the roots of Free Week

Highlights from first half of Free Week
screens

Trading One 'Community' for Another

Dan Harmon is talking to you

To 'Hell' in a Hand Device

Despite uneven filmmaking and questionable facts, an extraordinary cast brings this story about mobster Mickey Cohen's attempted takeover of L.A. and the handful of honest cops who thwarted him.

Decades after the original, this story about the deranged, backwoods cannibal with a power tool still has legs – and extra 3-D torque.

The film is suspenseful, dogged, relentless, and determined – amazing considering we already know the ending of this story about the 10-year hunt for Osama bin Laden.
arts & culture

Two Sides to His Story This whodunit is all in fun, but Austin Playhouse isn't having as much fun with it as it could

Herd the Third: More Concerti by Bach for Multiple Harpsichords 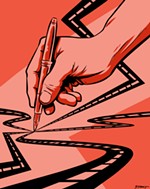 Letters at 3AM: Notes on a Long, Long Journey

Artists are but translators of that which flows through them

Your Style Avatar examines the Crown Jewels. Don't be nasty ...