pdf
ON THE COVER:
The Writing's Not on the Wall Yet
features

They ain't too proud to beg: But why should they have to?

Lege preview Part II – the wonders and the horrors

Water: Rising to the Surface

Considering Texas' future – a few things to keep in mind

Then There's This: AE: The Plot Thickens

City manager and consumer advocates finally agree on something

Strict requirements may yield a small, homogenous pile of applicants

Community-Backed Charter in Travis Heights Goes to the Board

As AISD considers dumping one charter, a new one is floated

One expects Council will be more vigilant the next time around

Tips and Techniques From a Kosher Cooking Expert

Box sets dwindle but not in scope

Home Entertainment for the Holidays

Best bets for DVD and Blu-ray

The Incredible Mel Brooks: An Irresistible Collection of Unhinged Comedy

How to Enjoy Movies Without the Eyestrain

Law and Order in the Land of Pixels

There's little about this return trip to Middle-earth that feels "unexpected" or fresh.

Writer/director Brian Savelson’s feature debut is a study in fine gradations of resentment in the great outdoors.

This Bollywood action comedy is the eighth entry in the popular Khiladi film franchise.

Palestinian and Israeli baby boys are accidentally switched at birth, and that discovery in adulthood creates many repercussions.
arts & culture The Writing's Not on the Wall Yet 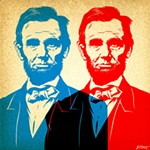 Letters at 3AM: Did Abraham Lincoln Deserve a Second Term?

In 1864, Lincoln would have seemed more in favor of war than peace

City leaders prep for another multimillion dollar giveaway (shhh, don't talk about it; you'll ruin it)

Neo-hippie aerialists have Your Style Avatar beside himself

Holigays are upon us, people. Have you mapped out your calendar?

The Luv Doc: How Much Spirit Do You Like in Your Christmas?