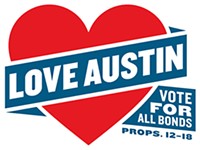 You never know what you're gonna get

Then There's This: As the Door Revolves ...

Hinojosa won by the biggest margin

Everything gets the green light except 6, 8, and 15

Will SBOE's ideological wars continue for another four years?

And all the rest

Gerald Daugherty is back

A GOP Win in Huber-Daugherty Replay

Gerald Daugherty is back

Fate of Women's Health Care in Court's – and Perry's – Hands

When Is a 'Game Room' a Bedroom?

The fight over superduplexes continues at 1917 David Street

Council: I Hear a Lotta Buzzin'

The Hightower Report: Why Did the Chicken Cross the Road?

To run away from the factory farm!

The Man With the Iron Fists

This incoherent mass of Eighties kitsch is the brainchild of tae kwon do master and motivational speaker Y.K. Kim.

The Other Dream Team

Who's the "other" Dream Team? The freedom-championing Lithuanian basketball team at the 1992 Olympics, of course.

Simon and the Oaks

This Swedish import is a family saga that's shaped by the looming Nazi invasion, forbidden love, and unsound decisions.

Daniel Craig's glum third go-’round as 007 is enhanced by fun turns by all the supporting players, as well as the film's exciting camerawork.

Mary Elizabeth Winstead and Aaron Paul portray a married couple who are plagued by the disease of alcoholism.
columns

Best discoveries of the year

This could be the beginning of something really sweet