pdf
ON THE COVER:
If I Had My Way
news

The Life and Death of Schools

'Spiritual Warfare' is no substitute for the earthly obligations of government

Then There's This: Aquifer Angst

Will the city poop out on its fight to block a wastewater permit?

Two districting activist groups do outreach for the November election

Fayette's Fate Up in the Ozone

AE proposes to sell its Fayette interest, but it may not fly

Early Warning: The Lege Is Coming!

The Trib Fest previews the next Lege, and it ain't necessarily pretty

The Hightower Report: Life Is Beautiful in MittWorld

In which Mitt Romney lives in fairy land

Feed Your Belly and Your Brain!

If I Had My Way

Being a musician doesn't always come with a choice, and rarely includes health insurance, so HAAM Benefit Day remains paramount

Live at the Continental

Scenes From a Marriage

This comedy about four female friends on the eve of one’s nuptials is at times dangerously funny.

Hello I Must Be Going

The marvelous Melanie Lynskey, for once, gets the starring role in this movie about a woman who gets blindsided by divorce.

There's no need to put a stake in the heart of this animated film full of familiar monsters; it's already deadly dull.

House at the End of the Street

When a Manhattanite returns for a visit to his old liberal arts college, he falls hard for a student 15 years his junior.

The Perks of Being a Wallflower

This film adaptation of the bestselling, much-loved YA novel about young social outcasts finding their way is marred by its its sunny optimism.

Despite the cookie-cutter dysfunction seen in this college girls' a cappella group, this film film can be a lot of fun.

Two mad-as-hell mamas take back their public school from the bureaucrats and unions that seemingly enforce the status quo.
arts & culture 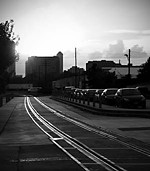 All Over Creation: When the Truth Hurts

After suffering through a friend's lousy show, is honesty the best policy?

For celebrating one of the rare wins in hate crimes legislation in Texas, this play is worthy

After a Fashion: Happy 60th

Your Style Avatar occasionally must offer a mea culpa. Get in line ...

Get lost in the Barton Hill Farms corn maze

The Luv Doc: The Iron Fist of Fashion

In Austin, fashion is based on the following question: Will I sweat in it?

Vinceable: Can this really be the end for VY?