Point Austin: It Adds Up

Then There's This: The Urge To Conserve

Death penalty is off the table, but so is clemency

City shelter will need to do more with less

Residential short-term rentals get the go-ahead from City Council

A Council's Work Is Never Done

Arena Will Not Have To Register as a Sex Offender

Citigroup exec wants to be remembered as a reformer

Crawl (or should that be pedal?) around the East Austin bar scene with the 'Chronicle'

BY VIRGINIA B. WOOD AND THE FOOD STAFF

Yellow Jacket, Weather Up, and the Scoot

BY CLAUDIA ALARCÓN AND WES MARSHALL

BY JESSI CAPE AND MEGHAN SPEAKERMAN

BY KATE THORNBERRY AND JESSI CAPE

BY RACHEL FEIT AND MELANIE HAUPT

Esteemed barbecue master speaks on the history of grilling

Bert's BBQ rises from the ashes to return to West Campus

Sharpen your wits and your appetite with this week's 'Meal Times' Metal has a new home in Austin, and a new sponsor.

Playback: KOKE Is Back

The original KOKE returns to a soda fountain near you

Metal up your drain pipe.

Have Wheels, Will Travel

Zach Anner talks about his web celebrity, his axed travel show, and the new project that got him back on the road

Portrait of the Artist as a Righteous Dissident

The Tangible Pleasures of Cinema

The Sprocket Society gets hands on with film

Alison Klayman's doc is as much a rallying cry for freedom of expression as it is a portrait in progress of an artist whose career is ongoing.

This franchise reboot doesn't reinvent Bourne, but it does revive it to great effect.

A wan political comedy guaranteed to offend no one.

Travis Pastrana and friends perform stunts that are captured in 3-D.
arts & culture

Dance of the Century

All Over Creation: Two-Stepping With Lyndon

To play historical figures like LBJ and Groucho, actors ought to dance with them

'Stories From Deep in the Heart'

Austin teens use radio to preserve traditions, thanks to Texas Folklife

The cast sings together with ease, but this new work hasn't yet found its voice

No lack of hipness on these streets

Letters at 3AM: A Jog in the Smog

What we know is increasingly disconnected from what we do

Stephen is almost ready for his close up, Mr. Bad JohnPaul...

Stanley Roy is back, and so are you, if you feel the urge to camp it up.

The Kolache Capital of Texas is worth a visit.

This is why foreigners hate Americans so much: Our ignorance, our self-absorption, our oblivion. 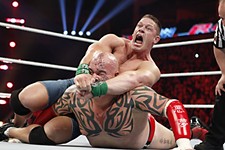