pdf
ON THE COVER:
Working 'The Corner'
news 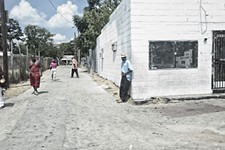 Photos: Life at 12th and Chicon

A day in the life on 'The Corner'

Perry's health care rejection blames everyone but himself for lousy government

Then There's This: Back to the Garden

New charter school has lost some of its recruits

Over the next five years, department would need 257 more hires to keep pace with population growth

Council's on break, but these two are hard at work

Mark Your Calendar: Primarily Yours

Gearing up for the July 31 primary run-offs

Lottery Commission alleged the couple had tried to defraud the state

Appeal Denied, Another Heads to the Chamber

Many kids are reading about the wonders of GMOs in school This blockbuster of a wine comes at a bargain

Chinatown chef worth writing (by hand) about

The same delicious, exotic foods offered by the Mediterranean Chef brand taste even better when sampled in its Cafe Playback: Don't Fence Me In

The Fun Fun Fun Fest schedule arrives, Flesh Lights return from touring with the Hives, and Tim O'Connor lives to fight another day

'This Side of Crazy'

'A Thousand Sad Goodbyes: The Songs of Gene Clark' The End of the Line?

As print media money dries up, political cartoonists look to the web

A Southern White in the Social-Justice Trenches

Living an almost feral existence on a wild, low-lying area of the Louisiana coast known as the Bathtub, young Hushpuppy narrates her own vivid life story.

In this Bollywood romantic comedy, couples fall in and out of love while trying to resist arranged marriages.

Spanish filmmaker Nacho Vigalondo cloaks this romantic comedy within the promise of a science-fiction story.

Hymns of shame (and fart noises)

The title may describe Martin Burke's performance, but is the play worthy of his talents?

Is Life Worth Living?

This obscure Irish comedy really answers the question: Why do we need theatre? Letters at 3AM: Accidents of Birth and Rebirth

The unacceptable trade-off for a medically extended life

Is Bad John Paul so bad he's good or so good he's bad?

Love Creek Orchards has the only tree-ripe apples available in the U.S. in early July

Ever find a half-eaten Hot Pocket in the crack of your sofa?

Head to Pinballz for this super tournament