e-edition   |   pdf
ON THE COVER:
The Reluctant Celebrity
news

A Quarrel With the Status Quo

Then There's This... : Austin's Never-Ending Story

Deadline reporting on the city of reinvention

Carpenters union says workers are getting stiffed on state project

Will the Supremes find innocence sufficient for vindication?

A Brighter Day for Martin Ezell

A bit of good news on the sex offender registry beat

Can Austin Get Its Arms Around ESDs?

Another Charge of Negligence at APD's Crime Lab

Briggo: an Austin company at the crossroads of taste, technology, and social interaction

Wine of the Week: Zinfandels for the 99%

Affordable Zinfandels that can stand up to a slice of pizza

Peace Through Pie – and beer

When you get caught between the moon and New York City, it's time to head back home to Austin

Club turnover has come due – embrace it

For the Good Times 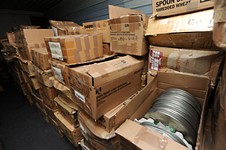 Kat Candler continues her chronicles of youthful frenzy in 'Hellion'

Not following us on Twitter and the blog? Here's what you've been missing

A technically exemplary but otherwise unremarkable piece of fisticuffs filmmaking.

Man on a Mission: Richard Garriott's Road to the Stars

This film is a behind-the-scenes document of Richard Garriott's quest to be the first second-generation astronaut in space and the actual journey.

All Over Creation: Re: Views

What makes a review a review?

A journey both medical and existential

Of course the British have an Egg Information Service

The Luv Doc: What Next: Truck Taint?