pdf
ON THE COVER:
Where Comedy Lives
news 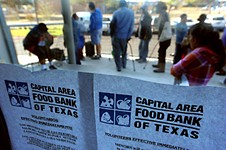 One Day at a Time

While helping our neighbors, consider the structures of poverty

Want to make a difference? Here's a good place to start.

Fork in the Road on Sixth Street

AISD board slated to vote on charter school plan Dec. 12

Sticking to His Guns on the Wrong Guy

A grassroots movement is changing the U.S. food culture

An attitude of gratitude

Worthy ceviche from a mall food court? Trust us.

Finally we can condone getting Sauced at the mall
music

Polish metal got me to Poland

One, Two, Tres, Cuatro: The Sum Is Greater Than the Whole of Its Parts

Thirty-five years later, only who's doing the clutching has changed

Side One: See How Far I Get

Oh! What a Miracle!

The Art and the Arduousness

Going Back for 'Seconds'

The folks at Aardman Animation, who gave us Wallace & Gromit, seve up an instant – and funny – holiday classic.

George Clooney teams up with Sideways filmmaker Alexander Payne for this funny but tender story that's a little too smug for its own good.

Martin Scorsese steps outside his comfort zone to create an effects-heavy children’s film set in France – and winds up creating one of his most splendid and personal films.

This Muppet reboot is an absolute delight and puts an end to the great Muppet diaspora.

My Week With Marilyn

Based on the memories of Colin Clark, this movie recounts his time getting to know Marilyn Monroe while she was in England shooting The Prince and the Showgirl with Laurence Olivier.

With this new entry, the series officially marks a transition from relatively harmless Victorian-minded trash to something flatly pernicious.
arts & culture

All Over Creation: Under the Influence

So what does being named one of the nation's most influential critics really mean?

Despite the author's absence, Different Stages delivers a fine production

Page Two: The Metaphoric and the Mimetic

Luv Doc Recommends: A 'Hole' Bunch of Thanks With Chris Brecht & Dead Flowers