pdf
ON THE COVER:
By Land and by Sea
news

As Austin's animal welfare center moves to a new building, will the delicate balance of 'no-kill' and resources be maintained?

Epic Downtown plan continues, and the devil's always in the zoning details

News from Austin, Texas, and beyond

Total of 45 people arrested over weekend

Where Do I Vote on Election Day?

Voters have their choice of polling sites this year

Drunk if by land and booze if by sea?

The Dutch invented a mobile bicycle bar? File under 'Not Shocking.'

Get your daily dairy

Austinites prepare to cheer on Qui and Curren

An abundance of benefits and other foodie events

It's the sweet life at Dolce Vita
music

Goblin, BlackenedWhite, Everything Is Boring & Everyone Is a Fucking Liar, Era Extraña, Golden Era

Beyond the Lightless Sky

Why Should I Get Used to It

Quiet in the Valley, On the Shores the End Begins

All the fun fun fun that fits

From Łódź With Love

The Shell They Sell (He's Swell)

The notorious life of Serge Gainsbourg is whimsically re-created onscreen.

Aki Kaurismäki's distinctive blend of deadpan humor and quotidian melodrama comes through in this new film.

A psychological thriller that's stripped of the usual Hollywood trappings, this film maintains a sense of oppressive threat throughout.

My Afternoons With Margueritte

Gérard Depardieu plays an oafish man who bonds with a cultured older woman, who teaches him to read and alters his life.

In this Bollywood film, a video-game character comes to life and causes lots of destruction.

Sensitive to the zeitgeist of the moment, this Brett Ratner film with the A-list cast is a real people-pleaser.
arts & culture 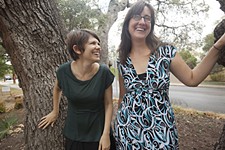 The Uses of Joy

When Conspire Theatre helps incarcerated women, it's all in the game

All Over Creation: Award Fever

Whenever you feel like throwing a pillow over the Payne Awards, consider this

The novella's nightmare world is so engrossing, you can't tear your eyes away
columns It is only a matter of time before an interconnected world work force begins to ask, 'Who are we really working for?'

Small Disputes – Should I Hire a Lawyer?

Undead or nonliving, Your Style Avatar dutifully shuffles along the coil of costume contests

Brilliant Texas bluesman Mance Lipscomb gets due respect in Navasota

'The roller coaster capital of the world,' no bears in Africa, etc.