Baird vs. Lehmberg off to a blazing start

Mayor anticipates a year of living dangerously for City Hall

Hancock Golf Course on the Block?

Not enough revenue, they say

AE Rate Hike Opponents Say 'Do It Over'

Energy giants have their hands out

Who wants to be a billionaire? What does your restaurant garden grow?

News bites that are easy to digest

Food events for the stomach, soul, and liver Exits & All the Rest

These Ghosts Have Bones

The Best of Times
screens

Beavis and Butt-Head are back

Christina Ricci stars in this strained romantic comedy set in the world of renaissance festivals.

Normally a maker of big, explosive movies, Roland Emmerich directs this conspiracy-minded potboiler which questions the veracity of Shakespeare's authorship.

A high-powered cast drives this fictional depiction of what might have occurred in a top investment firm in the hours leading up to its collapse.

As infectious as the latest viral cat video, this animated film has the added slam-dunk of Antonio Banderas purring the voice of the title character.

Johnny Depp stars in this adaptation of one of Hunter S. Thompson's earliest novels, which is set in Puerto Rico in 1960 and soaked in booze

Is Curtis LaForche slowly going mad or is something apocalyptic about to happen? Michael Shannon stars in this truly unsettling movie.

Did we miss the memo asking for the umpteenth retelling of the Alexandre Dumas classic? 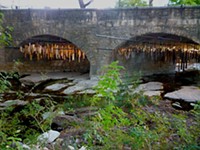 All Over Creation: Here Today ...

What, this? This old thing? Oh, it's nothing but an enchanting line of staples straight down my abdomen!

Other anarchists want love, too; get in line, pal

Bastrop State Park is planning a soft reopening on Dec. 1

Luv Doc Recommends: Zombie Ball: The Party To Die For

Longhorns host A&M in their regular season finale, and more

Winning streak on the line Friday vs. the Cyclones