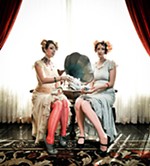 It's the economy, dollface

Council takes its stand with as few voters as possible

Council finally comes around on a pilot program for electric cabs

It's May in a Landslide!

Is the enviro movement due for a branding makeover?

Roads and parks are on the November ballot

The race to determine who's more conservative

The Occupation of Austin

The '99 percent' takes a stand against corporate greed

Cirkiel vs. Petersen cook-off, Champagne, and pomme preservation on the menu this week

The most famous restaurant in the world is profiled in this documentary.

Finally, a remake that’s not a just a mindless retread.

In this Mexican comedy, a married couple resorts to desperate and ridiculous measures when the husband develops erectile dysfunction.

Functioning as a prequel to John Carpenter's The Thing, this film answers questions even though there's little mystery.

Emilio Estevez directs this film about a spiritual pilgrimage, which stars his father Martin Sheen.

This movie about a gay hookup that becomes something more is perceptive, emotional, comical, and much more.
arts & culture

With Shakespeare's 'problem play,' you get a two-for-one, comedy and drama
columns

Page Two: In the Red Austin's gay communities are the best

Cheap brews and exciting hockey at the Cedar Park Center

The Hilltopppers play their final home games of the year, and more