pdf
ON THE COVER:
Perry the Executioner
features 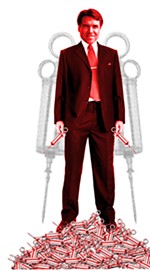 Texas leads the country in executions, and Rick Perry holds the record tally

When it comes to science, the Inquisition's got nothing on the guv

City Hall Hustle: Come On Down!

Council takes Austin Energy's bonus money and runs with it

The Forensic Science Commission does what it can under A.G.'s limitations

Council adopts a budget with the sausage prepared in public

The plague of wildfires reflect conditions beyond a temporary drought

Burn bans are now a fact of life

Gov. Perry boasts his job numbers, but the facts belie him

Pig out at restaurant anniversaries and dine with Fido

Stevie Wonder in 10 songs? It's a start.

Coming down from the Ozark Mountains

Proof it's okay to dream

Freedom songs for the 21st century

Sam Beam on saxophones and subjectivity

Don't call it a comeback

The party ain't over

The silver lining to Nine Types of Light

Greetings from Austin, circa 2008

For the sake of the song

The American treasure turns the tables, asks the questions

Recounting the first decade of the Austin City Limits Music Festival, one year at a time

When You Walk in the Room

Ghost on the Canvas

Outtakes Get Their Day in Court

Pamela Yates returns to a haunted Guatemala in Granito: How To Nail a Dictator

Giving the Sidekick a Spotlight

From behind the shadow of the Ninja Turtles comes 'Casey Jones'

Did two Austin Web designers tap into our unconscious desire to replicate stock photos? Nah – they're just having a laugh.

Bucky Larson: Born To Be a Star

This Iranian film about two girls who begin a secret relationship is as much a political statement as it is a love story.

I Don't Know How She Does It

Sarah Jessica Parker stars in this comedy about working-mom woes.

Kevin Hart: Laugh at My Pain

Two generations of circus clowns, set against the bloody backdrop of Franco's Spain.

Disney has retrofitted its 1994 hit in 3-D for a limited theatrical run.

This doc about Ken Kesey's famed bus goes all over the place but never seems to end up anywhere all that revelatory.
arts & culture

All Over Creation: Element of Surprise

The joys and importance of 'I didn't see that coming'

After eight years, a shrine to South Austin arrives on South Congress

The revival of this gender-play comedy still tastes freshly squeezed

Stephen laments the political heat generated by the fires