e-edition   |   pdf
ON THE COVER:
The War on Women's Health
news 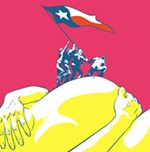 The War on Women's Health

What Does It Cost To Cut $62 Million?

The hidden costs, from cash to cancer

The self-appointed defenders of life and family values are neither

Is Austin heading for a double-dip recession?

Conviction in death of Natalie Antonetti

Wiping Doggett Off the Map

Renewed efforts to redistrict Lloyd Doggett out of office

A Modest Compromise on Abortion

Trying To Catch the Chan Train

What does the Place 1 candidate really think of rail?

Just Like You – Only Way Richer; and Worst of the Worst Contest

Austin is turning into quite a sophisticated bar town, and this one tops the list

You had me at mustachioed barkeep

Gluten-free at Mr. Gatti's, a smorgasbord of food fundraisers, and pastries fit for royalty

Last of the Delta Bluesmen

Echotone explores the intersection of art and commerce in Austin

Head for the Hills

Speculating on who will replace Steve Carell at Dunder Mifflin

The rants of the late, great stand-up comic Bill Hicks sound as fresh and brilliant as ever.

Multiple lives collide brutally one day at Goa Airport in this Bollywood film.

Tom Shadyac, the director of Ace Ventura: Pet Detective has found spirituality and now wants to fix the world's problems.

Whether this is a real film or a priceless stunt, Morgan Spurlock has the goods on product placement.

Catherine Deneuve stars in this French comedy set in 1977 about a trophy wife.

In this animated film from the makers of Ice Age, a domesticated macaw finally learns to fly.

This reboot of the franchise is too self-referential for its own good.
arts & culture 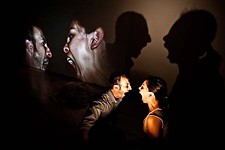 At the Fusebox Festival, size matters, but that doesn't always mean 'big'

Why They Come Back

Charles P. Stites makes this two-hour one-man show look like a romp in the park

'There Ain't No Forgettin''

Part One: My Beginnings and Chicago

Letters at 3AM: Stirling at Road's End

Stirling Silliphant had a marvelous gift for writing, but he sold it out

Stephen loves children, dons black, and gets blown (away)

Texas avoided much of the devastation of the Civil War, but not all of it

Luv Doc Recommends: Michael Ventura 'If I Was a Highway' Booksigning

Real Salt Lake hopes to be the first MLS team ever to win the CONCACAF Champions League, and more