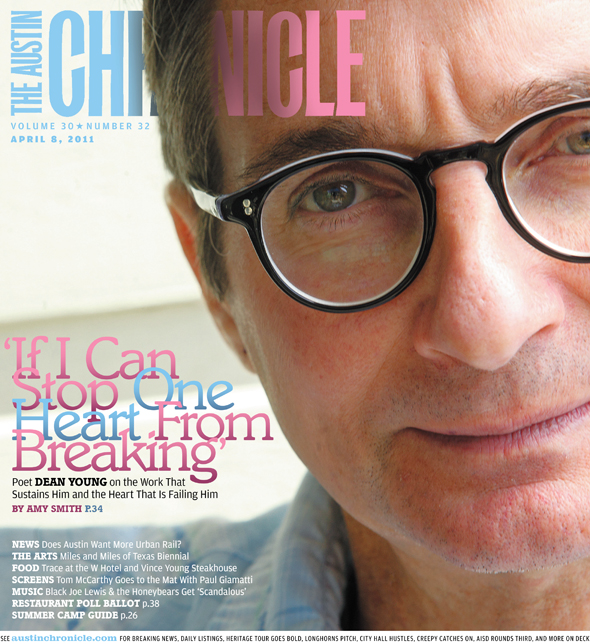 pdf
ON THE COVER:
The Heartsick Poet
news

The city is pushing for a 2012 vote to build urban rail. The critics are asking, 'Who needs it?'

City Hall Hustle: No Ports in This Storm

The Personal Is Political

All Key and No Lock

No deal on Eastside Memorial with Southwest Key

You Can Win If You Don't Play?

At the Lege, the most meaningful votes may not be votes at all

The Price of Being a Pierce

Lawsuit filed against state over census

Making room in the budget for downtrodden traditionalists

The Party Bus Is Over

The Return of Leslie Sbrocco

Who knew drinking wine could be so much fun?

Two established franchises bring their 'A' game to new ventures

Trace at the W Hotel

Food so local it could run for City Council

Vince Young turns his 'A' game to the steak game

Black Joe Lewis & the Honeybears' lightning strike sophomore disc, Scandalous, stops in for a G&T at the Mustang Ranch

Dinner in the Dark

When the Wolves Go Blind

From 'Howl' to Hamas

The bubbles have gone out of Russell Brand's remake of the 30-year-old original.

No Eres Tú, Soy Yo

In this Mexican romantic comedy, a man only discovers his true love while pining for the one he lost.

It's the true story of surfing sensation Bethany Hamilton, who lost an arm to a shark at the age of 13.

In this Bollywood romantic comedy, cheating husbands try to keep their secrets from a private detective and their wives.

Paul Giamatti stars in this dark comedy from the director of The Station Agent and The Visitor.

This vulgar medieval travesty is awfully good fun when it works.
arts & culture

Miles and Miles of Canvas

For 2011, the Texas Biennial lives up to its name by spreading across the state

Austin's newest comedy festival wants to get it 100% correct

A beautiful display of footwear cobbled as if from bark, moss, foliage, and fungus
columns

Page Two: An Injury to All

The universal perils of union busting

Letters at 3AM: Obama, Nukes, and Us

President Barack Obama fudges the truth of his nuclear policies

Taxes – April 18 Deadline? Can I Get an Extension?

Your Style Avatar keeps confusing the Volstead with the Mann Act

ALLGO: lots to be proud of. Austin Pride: not so much ...

The Dr. Eugene Clark Library is a monument to an unrequited love