pdf
ON THE COVER:
Your Name Here
news

Point Austin: Stop Me If You've Heard This One

Can the mayor persuade Austin voters this is a real city?

A vow to work together

Tuning In to Deaf Community

If Texas' liquor laws look good, you must be wearing beer goggles

LegeLand: Bill of the Week

Not enough stuff 'under God'

DPS narrows in on cargo-pants arsonist

Scoring a Point for Community; and The Kochs Are Coming!

No need to sugarcoat any of this news; it's already pretty sweet!

Let former Longhorns coach you in the art of eating ribs

What's brewing in the brewing world

Cirkiel shifts his command to the backspace

Takeout gets the highbrow treatment

Get your Francophile fix on Annie Street
music 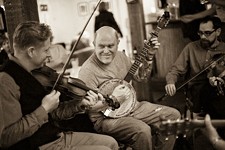 Big Boys guitarist Tim Kerr put Austin punk on the map, then spent the next quarter century painting on it

Our Bands Are Bands

Austin Music Poll winners are just going to have to wait until the Austin Music Awards, plus a closer look at SXSW's international acts

The Oscars get hip

Carbon dioxide emissions will be the death of us all unless we take steps to counteract the harm already done, says this new eco-doc.

This extravagant Indian/Tamil production is an apocalyptic science fiction rom-com with elaborate dance set-pieces and music by A.R. Rahman.

This newly crafted version of the Bieb's life story lops out some earlier segments and inserts more hometown material, new songs and performances, and footage of the film premiere.

In this psychological thriller, a man awakens after a car accident to find his wife doesn't recognize him and another man has assumed his identity.
arts & culture

Shaw does go on, but Austin Shakespeare delivers a strong show with tight acting

Letters at 3AM: Some Kind of a Man

After a certain age, there's no avoiding how death is a permanent part of life

Legends: The Next Generation