Budget is ready for council approval, but a few sticking points remain

But Texas Wants You Anyway

When the roll is called up yonder, don't expect a slam dunk

The Man Who Wasn't There (If Only)

Mott's Workers Make a Stand; and It's Raining Overdraft Fees

This black-tie affair celebrates the anniversary of Mexican independence

Eating and drinking, drinking and eating, all the while helping others 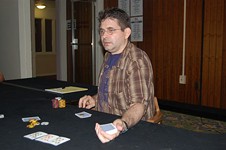 Tucked up in the Catskill Mountains, All Tomorrow's Parties stages a music festival for its own

KUT announces a new Cactus Cafe manager, plus this week at the movies

A Legacy on Trial

Dusting off Starcrash, an interstellar swashbuckler

Hellcats makes for a kicky start to fall programming

This is an even-handed portrait of discontented lovers: A love that starts out in a fever winds up with lots of pistol-waving.

This Hindi action film tells the story of a fearless but corrupt police officer who learns the value of family ties.

A German couple teeters on the jagged peaks of passive aggression and self-doubt.

Is Joaquin Phoenix having a meltdown, or is he putting us on? Only his brother-in-the-law, the film's director, knows for sure.

This faux documentary chronicles the efforts of a 17-year-old kid to lose his virginity.
arts & culture 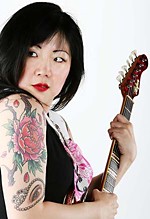 Comedy is her life, but Margaret Cho is just mad about the music

Complimentary classes at Ballet Austin and Tapestry, plus a free monthly tap show

Exploring the meaning of public art and competing for a $10,000 commission

Aerialists add theatrical magic to the myths here, but a Texas twang sounds off

Muses IV: Memories of a House

This site-specific show is in a lovely home, but the characters in it lack depth

Letters at 3AM: The 'Austin Sun' Gets Hung

Old Austin Sun writers may have expected to hang, but not in a museum

Your Style Avatar's Swish Alps of the social season loom on the horizon. Time to strap on those designer skis.

HRC's Dinah will be chillaxxified by the Gay Place

Unpacking the octagon for the first time in Austin

Football has begun and all is well in the land