pdf
ON THE COVER:
Cult of Personality
news

The annual city budget workouts begin, and you're all invited

Choosing a reasonable tax rate, what the voters say, and important dates

What the numbers show

Point Austin: Step Up to Citizenship

The curtain rises on the annual budget pageant – places, please

Public sector experience clinched the deal for transit board

Creationists Get Schooled in Court

No science ed degree with a biblical viewpoint for you!

Did the state execute an innocent man?

A snapshot of life since the spill

Project prompts rethinking on what it means to remodel

Check out any of these frozen yogurt shops for a cool, tangy treat

BY VIRGINIA B. WOOD AND KATE THORNBERRY

The culinary-themed mystery genre isn't new, but DeMers sidesteps the common 'cozy' into a world heavily influenced by noirs

A Patch of Blue Sky

Love on the Dial

Jay and Mark Duplass rock the cradle of love in Cyrus

Jean-Pierre Jeunet wages war on war in the spirited Micmacs

Zynga touches down in Austin, pixel-jamming at the Fantastic Arcade, and more

John C. Reilly, Jonah Hill, and Marisa Tomei co-star in this Duplass brothers' comedy about a young man's obsessive attachment to his mother.

Grown Ups is the latest in an ongoing series of achingly nostalgic Adam Sandler schmaltzfests.

Joan Rivers: A Piece of Work

This documentary is a softball, entirely sympathetic, and wickedly funny portrait of the artist at an advancing age.

The disfigured Weird Western Tales antihero gets his own movie, which mixes elements of the Western and the supernatural.

Tom Cruise and Cameron Diaz co-star in this overly cute action film about a rogue CIA agent and the woman along for the ride.

Set in the Ozark Mountain backwoods of Missouri, this tense drama is an exceptionally good film.
arts & culture

The Things We Do for Love

All 210,000 prints from the Magnum Photos archive are available for public study

Even with an uneven staging, Paul Rudnick's biblical comedy is a fabulous play

Page Two: Yes We Said Yes We Will Yes

The Chronicle in bloom 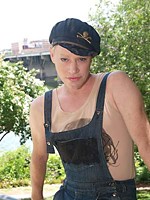 Stephen rubs and rubs and can't make it smudge! No, we're not talking about the Louisiana coastline.

Act loco? You don't have to ask us twice!