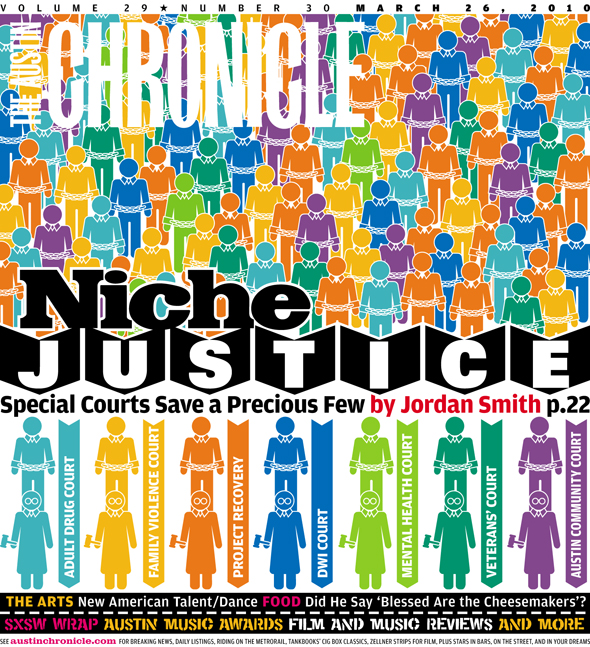 And Now Veterans: 'We Owe Them'

Help for defendants who are homeless, alcoholic, or mentally ill

Point Austin: Yes, They Did

You've got health care – even in Texas

Recycling, homeless housing, and spandex – cure for a migraine?

Urban rail is what you won't see this November – so what will you see?

The longtime foes learn to kid-glove thy neighbor

AWPC returns to its feminist roots, but not everyone's happy

Quintana trial to be public

Perry Looks Justice in the Eye

From One Compound to Another

DeLay Back in the Fray; and Boeing, Going, Gone 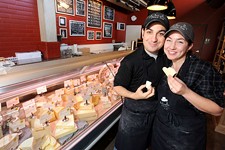 A Portrait of the Cheesemonger as a Young Couple

Antonelli's Cheese Shop is an intimate neighborhood shop where curious patrons can taste everything, ask a million questions, and have their selections cut to order

With a view of the greenbelt, a relaxing atmosphere, fashionable bar offerings, and above-average food, this new South Lamar restaurant has all the makings for success

There are so many luscious dishes on offer here, it may be difficult to decide on just one or two
music

Everybody Was in the French Resistance ... Now

You Say Party! We Say Die!

I Never Travel Far Without a Little Big Star

Thanks for the memories

Keep Your Ear to the Ground

In this romantic comedy, Gerard Butler is a bounty hunter charged with capturing his ex-wife, played by Jennifer Aniston.

Diary of a Wimpy Kid

A wisecracking preteen keeps a diary about the torments of middle school in this true-to-life story.

In this political thriller, an FBI agent investigates the murder of a Taiwanese-American.

Ben Stiller and (one-time Chronicle cover girl) Greta Gerwig star in this new film by the director of The Squid and the Whale.

How to Train Your Dragon

Soaring animation should make this story about a Viking boy who befriends his enemy a perennial favorite.

Bong Joon-ho, the South Korean director of The Host, is back with an exquisitely rendered murder mystery fraught with psychological suspense.

This second installment in a three-part dramatization of dirty dealings in Yorkshire is concerned with the notorious corruption mill that powers the region’s law enforcement.

This final film in the three-part series affords a great deal of satisfaction in resolving the plot’s many mysteries.

Jude Law and Forest Whitaker play repo men in this future world where body parts can be bought and sold but also repossessed.
arts & culture

If fast, physical action in a national face-off is what you want, try Ballet Austin

On March 27, you may encounter theatre where you least expect it

Horton Foote's drama blows in like a breeze from the gulf, warm and whispery

The screenwriter of Roadie visits his younger, more serious self

Your Style Avatar is mistaken for a well-paid gossip columnist, and Sunny wraps SX with a 'Nutrub'

This year was all about queering conventions ...

History Ahead: Stories Beyond the Texas Roadside Markers is part travel guide and part history book