On the Road With Bill White

Footage from the campaign trail

Dems for Lite Gov: The D.A., the Organizer, and the Deli Man

In this race, everyone has low name recognition across Texas

These candidates are all over the map on issues

One candidate draws on criminal law, the other on civil, for criminal bench

Dems square off in three races

It's not the sideshow candidates who should worry Texas voters

News briefs from Austin, the region, and

Reaction to budget cuts belies claim that decision was student-backed

Cap Metro Turns Toward a 2020 Vision

AISD Headed for Showdown Over 'Exigency'

Tires on the Move: What About Fleet Services?

Questions pile up as the pile of tires comes down

Hunger: Hilarious!; and Getting to Know the Right Wing

With accommodating hours, reasonable prices, and an interesting location, Piedras Negras Taqueria #2 is No. 1

Don't be fooled by the name: La Boîte's Dan Bereczki and Victoria Davis think outside the box

Check out all the new additions to Austin's foodie network

Crazy Heart wasn't Stephen Bruton's only last project, and we have Geoff Muldaur & the Texas Sheiks to thank for that

There Is Love in You

Loving Takes This Course: A Tribute to the Songs of Kath Bloom, Thin Thin Line
screens Casual gaming's rise opens the doors for players and developers

Back in the Realm of the Senses and Provoking All Five

The Overbrook Brothers premieres on IFC on Demand

Independent Lens airs The Eyes of Me, a documentary look at four students enrolled at the Texas School for the Blind & Visually Impaired

This year's five nominees for the best animated short Oscar are available for viewing. This year’s five Academy Award-nominated animated shorts include “A Matter of Loaf and Death,” the latest stop-motion Claymation piece from Nick Park and Aardman; “Granny O’Grimm’s Sleeping Beauty” by Nicky Phelan; “The Lady and the Reaper" by Recio García; “French Roast” by Fabrice O. Joubert; and the winning “Logorama” by the H5 collective.

Judge for yourself among the five films contending for this year's Oscar for live-action short. The five international shorts nominated for Best Live Action Short Film include Patrik Eklund’s “Instead of Abracadabra," Luke Doolan's “Miracle Fish," Juanita Wilson's “The Door,” Gregg Helvey's “Kavi," and Joachim Back’s award-winning “The New Tenants.”

A teenager's Greek mythology book comes to life and thrusts him into an adventure to recover Zeus' stolen lightning bolt.

A disquieting feeling of apprehension is made palpable in Michael Haneke's import, The White Ribbon.
arts & culture

A Talent for Deception

When Joey Hood is onstage, you want to buy whatever he's selling

Free tips on auditioning for musicals, and animals are artists, too

An unrelentingly fast tempo flattens out the St. Ed's staging of Ibsen's epic

This triple bill wasn't all truth or beauty, but it was a good night at the ballet
columns

The Waco Mammoth Site boasts the largest known concentration of mammoth skeletons, left after the beasts died from the same natural event

Please don't gay bait my neighborhood; it eventually gets back to me 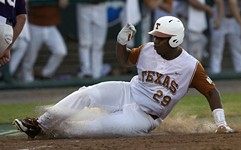 In what sport does the University of Texas not excel?