Can't Get There From Here

While suburban rail spends and stumbles, Cap Metro's transit-dependent riders wait at the end of the line

Point Austin: How Much for a Hanger?

There's still time to influence the vision for Austin's future

Legislators ponder how to keep questionable forensics out of the courtroom

Global Game That Never Ends; and A New Name for Occupation 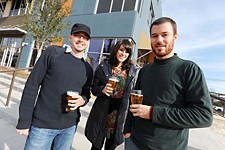 From Beer to Infinity

Wine, beer, and farmers' markets for the upcoming foodie week

The food is inventive, the wine list inspired, and the prices can't be beat
music

A flashback from Red River's seedy past, the Sour Notes hit a sweet spot, and Patty Griffin gets Grounded in Music

Viva the Nam's co-creator talks about his inspirations

Viva the Nam's co-creator talks about his inspirations

Feral Cinema Released Into the Wild

Caprica, a prequel series to SyFy's Battlestar Galactica, is out of this world

The Book of Eli

In a post-apocalyptic time, Denzel Washington is the lone man who carries the world's last remaining Bible.

Brendan Fraser and Harrison Ford play a parent and a scientist who fight time, man-made obstacles, and each other to find a cure for a rare childhood disease.

In this acclaimed drama from Chile, the maid in question is a compelling enigma.

This is a new Telegu-language romantic comedy.

Tens of thousands of arrows darken the sky in John Woo's epic retelling of an ancient Chinese battle.

The Spy Next Door

Jackie Chan plays an undercover CIA agent who turns out to be a disastrous babysitter for his girlfriend's three kids.

To Save a Life

This well-meaning but ineptly made message movie teaches that with the help of Jesus Christ, you, too, can prevent teenage suicides.

This whimsical, Belgian import is an animated stop-motion fantasy that uses childhood toys as characters who find themselves in all manner of goofy yet compelling adventures.

Veer is the name of an Indian man who courageously fights against the British Empire in this Bollywood epic.
arts & culture

For her first museum work, Jade Walker steps up to the plate and swings big

Local artists convene for a conversation about art, labor, and the economy

The best way to describe Different Stages' retelling of the myth: beautiful

'David Bates Since 1982: From the Everyday to the Epic'

Why throwing the bums out doesn't work 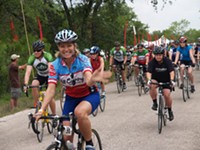 Your Style Avatar: A-one and a-two!

Tigers in Texas, Meryl Streep, and much more

Luv Doc Recommends: An Evening With Chastity and Alan Jr.

Still waiting for the Aztex schedule to be released. Meanwhile, in Africa ...