Point Austin: Not About the Cameras

The Sanders shooting has not been justified

Feeling confused? You must be talking to city legal

A new tool sheds light on a path toward conservation

Judge Perkins ready to hang up his robe

County Settles One Claim, Rejects Another

Austin Energy moves one step closer to a generation plan

RECA Gets a Splash of Cold Water

The Del Valle district would rather not deal with parents

Economic Indicators for Real People; and Swine Flu? Shame on You.

The kitchen serves food until 1:30am, attracting a late-night dining crowd that makes for splendid people-watching

Don't forget to save room for dessert

At Shuck Shack, the vibe is consistently summery, but the food is hit-or-miss

For nascent winemakers and grape growers, Grape Camp is invaluable

A guide to local foodie events during mid-November 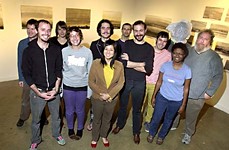 Ashes to ashes: drying off and winding down after Fun Fun Fun Fest

What else is playing at the Austin Asian American Film Festival

The new faces of late-night TV

Everything about Scherfig’s coming-of-age story about a girl in the London suburb of Twickenham in 1961 is spot-on.

In this Danish film, two men track down and kill Nazi collaborators in the waning days of the German occupation.

This British import exudes about as much outlaw swagger as Tom DeLay in a dance competition.

Amiable and proficient, this indie romantic comedy is never more or less than reliable.

Can you handle two weeks' worth of the East Austin Studio Tour?

Leave It to Beverly

Can a city so dedicated and so divided endure?

Your Style Avatar gets operatic in tiger stripes

Why didn't they just name the new lezzie version of the Cockpit the Strap-On?

The Lyndon B. Johnson National Grasslands north of Decatur are where the wild things live

Eminent Domain – What Is Fair Compensation?

Aztex release 14 players after failing to reach the playoffs, and more