pdf
ON THE COVER:
The Fire at AFD
news 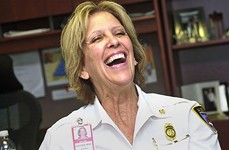 The Fire at AFD

Contract Kumbaya: The City and the Firefighters

A peace prize, a peace rally, and more of the same

City Hall Hustle: Everybody Join In!

Participation is an Austin thing ... except at Capital Metro

New briefs from Austin, the region, and beyond

A New Day for the EPA?; and Rich Boors in Fancy Drawers

City Sorting Through Web of Options

Justice's departure from court would tilt the political balance

Refusing to throw in towel, prosecutors take another stab at death row inmate How to Lower Your Cholesterol With French Gourmet Food: A Practical Guide

Foodie events around town for the week of Oct. 16-21

How to Lower Your Cholesterol With French Gourmet Food: A Practical Guide

Gumbo's Michael and Yoli Amr are back!

the Cipher, the Daze, the Steps

From Soldiers to Warriors, Straightjacket Hymns, Take It All In

Somedays the Song Writes You

Belly of the Lion

A Rocky Road to Recovery

The lights are still on at ME TV, but is it a new dawn?

Sealed With the Sigh of a Commiserating Spirit

Adam Elliot on Mary and Max, his Claymation film about unlikely pen pals

I Can Watch What Where?

Finding films for cheap on the Internet

A taste of the Austin Film Festival

In Afghanistan's version of American Idol, there's a lot more at stake than the glory.

All the Best: Fun Begins

In this Bollywood film, comic events unfold in an effort to cover up an initial lie.

This new Bollywood film is an underwater action thriller.

Before she became a world-renowned brand, Coco Chanel was a girl of few prospects but with lots of pluck.

From Mexico With Love

An illegal migrant worker dreams of becoming a boxer but suffers setbacks in this film shot in San Antonio.

Vigilante justice may be just what the law requires in this film starring Gerard Butler and Jamie Foxx.

The Coen brothers deliver one of their best and most personal movies, a kind of cockeyed Jewish fable that urges us to embrace life's mysteries.

This very special film is the rare children’s offering that isn’t coded for adults or made corny and flip for kids.
arts & culture 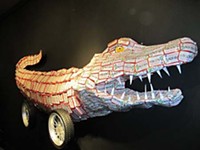 Deep in the Art

The once and future queen of Esther's Follies receives a special B. Iden Payne award

If dancing zombies and blood by the gallon appeal to you, this may be your dream musical

A Time for Life

A show offering a wonderful variety of strong art, but grouped by an unnecessary theme
columns

Whether it's in or it's out, the right twists reality to suit its own views

Are eight arms enough to hold Stephen in fringed buckskin?

The Dabbs Railroad Hotel in Llano isn't a cookie-cutter chain hotel; it's an experience

Eminent Domain – Can the Government Condemn My Property?

The Aztex continue to build (and win) in the offseason, and more