pdf
ON THE COVER:
Faces of Homelessness
news

Another Downtown attempt to find answers

Will a change in leadership give Cap Metro the fuel it needs to move forward?

LULAC, NAACP square off against principal

On eve of hearing, Perry reshuffles the Forensic Science Commission

Hyatt Riot; and The Chicken War

Thai Me Up – Thai Me Down

'Tis the season for Thai in Austin

Plus Some Old Favorites ...

Foodie events in and around Austin during the month of October

Called 'undervalued treasures' by James Halliday, all three of these McWilliam's Wines compete handily with wines twice their price

Shit happens: Hosing off and cleaning up after the glorious mess that was the 2009 Austin City Limits Music Festival

Into the Woods, With a Canister of Film

The 2009 Art Outside festival

'Beeswax' Buzzes Back Into Town

Game On, Game On Austin

So much supreme awesomeness to be had at this free, all-ages event

This Austin-shot indie from Andrew Bujalski is a remarkably naturalistic slice of life.

Vince Vaughn and Jon Favreau prove they are no longer swingers, but since this film is the only new national release this week, it's sure to be "money."

Expert documentarian Joe Berlinger sheds light on the epic environmental lawsuit filed by 30,000 Ecuadorans against the oil company Texaco, which is now owned by Chevron.

The Invention of Lying

Ricky Gervais lies through his teeth for laughs.

Should you believe the viral marketing hype about this techno-era haunted-house movie that's been playing sold-out midnight runs? Or Marc Savlov?

Paris, from the French director of When the Cat's Away, follows a half-dozen-plus Parisians and their interconnectedness.

Austria’s nominee last year for the Best Foreign Language Film Oscar is a taut yet unpredictable psychological thriller that deserves wide appreciation outside its homeland.

This is a rapturous, utterly engrossing account of the life of early 20th century French artist Séraphine de Senlis.

We Live in Public

The Internet-based social experiments of Josh Harris, the original dot-com visionary kid, are profiled in this cautionary documentary.

A Woman in Berlin

This is that rarest of wartime dramas: an intimate, sorrowful glimpse into the heart and loins of the hellish aftermath of war when sex is used as a weapon.
arts & culture 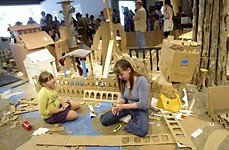 Why art that actively engages audiences is quintessentially Austin

In this show, the eye of the beholder is in the beauty as much as beauty is in that eye
columns

Page Two: And It Was All Right

Notes on a life saved by rock & roll

Letters at 3AM: The Missiles of October

Reflections on the Cuban Missile Crisis

Stephen's Home Alone adventure was not at all like Macaulay Culkin's

This week, when you see red, you see love

The Brazos Indian Reservation began as an effort to provide native Texans with a homeland, yet ended in tragedy

I Don't Want the Government to Take My Property