pdf
ON THE COVER:
Into the Wild
news

Riding to the End of the Line

Can Cap Metro weather the recession, balance its books ... and run the buses and trains on time?

Wyatt firing just the latest in string of management fiascoes

City Hall Hustle: And So the Money Goes

Final City Budget Adoption Not Quite So Final

DNC Does the Texas Waltz

National Dems have high hopes for Texas ... one of these days

The debate over WTP4 goes to a public forum

BY NORA ANKRUM AND AMY SMITH

Separation of Church and Taser

Did APD get rid of a cop because of his religious beliefs?

One Fiscal Year Down, Another on the Way

Council gives thumbs up to 2010 budget

Chocolate and kielbasa in the Hill Country

In the right hands, the pinot blanc can become a sexy wine with lightly perfumed aromas and just enough acid to keep it clean and interesting

The latest from former Jeffrey's Executive Chef David Garrido is this Mexican restaurant across from Austin Music Hall, and its budget-conscious menu touts tiny but pleasant selections
music

Balmorhea might not be one of Stephen F. Austin's Old Three Hundred, but it scored the movement

Austin's Monster of Folk strolls down Mermaid Avenue, inside Woxy's DJ booth, and beating the drum for HAAM Benefit Day

Twang, Shadow on the Ground

One Foot in the Ether

Dumped and disowned, Cabin Fever 2 gets a one-off screening to benefit the Austin School of Film

What's what in Austin gaming

Anvil! The Story of Anvil

Rust never sleeps, and metal never dies in this doc about the band Anvil.

Cloudy With a Chance of Meatballs

A zippy, lippy animated adaptation of the popular children’s book.

Bollywood bombast meets Just One of the Guys.

This locally produced film is an intimate and endlessly inspiring look at one family's struggle to cope with autism.

Soderbergh's corporate whistleblower comedy is tuned in the key of Richard Lester.

There are few laughs and even fewer scares in Diablo Cody's followup to her smash hit Juno.

The Secrets of Jonathan Sperry

The Love Boat's MacLeod captains a very different kind of ship in this Christian-themed period film.

Things go badly when these sorority sisters try to cover up a prank gone wrong and a serial killer enters the fray.

Tyler Perry's I Can Do Bad All by Myself

Tyler Perry's Madea delivers a couple of young delinquents to their only living relative, a shady nightclub singer who must rise to the occasion.

Kate Beckinsale plays a U.S. marshal who must investigate a murder in Antarctica and wrap it up quickly because winter is starting in three days.
arts & culture

Just what, exactly, is the Austin Museum of Digital Art up to these days?

Like the artist it salutes, this theatre piece is a wild mash-up of iconic Americana

For its ninth season, the cabaret company moves into a new home at the Long Center

In the true spirit of Pinter, Hyde Park Theatre's production is delightfully maddening

In turning sanitation workers into dancers and machines into giant birds, this work thrilled
columns

Instead of addressing our real problems, partisans fight over manufactured nonsense 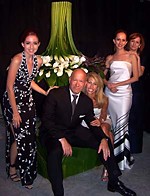 Your Style Avatar calla-lilies about

Waiter! There's a drag king in my show tune!

Can the Landlord Change the Tenant's Door Lock?