pdf
ON THE COVER:
A Claimed Space
news While we wait for federal reform, the health-care work goes on

City Hall Hustle: Don't Know Much About History, Or ...

Historic districts come to council, and the acreage gets tied in a knot

After rocky start, district tries to smooth out bumps

An Ethical Pecan to Crack

Doggett and health-care reform opponents have a conversation

One court-martial down, another one on the way

Media Watch: 'Statesman' Off the Market

After entering final negotiations to sell the paper, Cox Newspapers walks away from the table

Cause of Brees' Death Still Unknown

Genetically Engineered Invasion; and Big Oil Powers Up in D.C. A guide to some August foodie events in and around Austin

With at least two more months of summer left, it's not too late to enjoy paletas
music

Sleep and You Will See

Bend in the Road

The Hidden Costs of Free

Barfly on the Wall

Hugh Dancy and Rose Byrne co-star in this love story about a guy with Asperger's Syndrome and the girl who lives next door.

A citywide battle of the bands provides the grist for this endearing youth film that was shot in Central Texas.

Aliens-on-earth tale is wrenching, riveting, violent and best of all, a love story

G.I. Joe: The Rise of Cobra

Hasbro brings their boy toys to life with this story about an elite fighting squad.

Jeremy Piven stars in this swift-moving, cynical, equal-opportunity offender about a team of used-car liquidators.

In the Loop is a scabrous and funny study of how an offhand remark by a career politician can metastasize into an international conflict and, ultimately, war.

Estranged twin brothers must reunite and help one another out of trouble in this new Bollywood film.

This new Bollywood film is a comedy about different views of marriage.

A well-chosen cast props up this otherwise shallow story that stars Kevin Spacey as a therapist who turns to pot in the wake of a personal crisis.

Sex, money, and status are the names of the game in this Hollywood tale about a young Lothario and a woman who uses similar wiles.

The new film from the South Korean director of Oldboy is a stunning feast for the senses but veers off-track with its overlong meditation on vampirism.

Youssou N'Dour: I Bring What I Love

Seeming more like an electronic press kit than a bona fide documentary, this profile of the Senegalese singer is both welcome and lacking at the same time.
arts & culture Wait, it's Christmas, not New Year's, that the Grinch steals, right?

A Shadow of Light 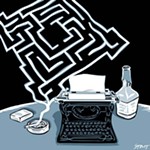 And Stephen said, 'Let there be SoCo,' and there was SoCo. Stephen saw that the light was good.

The higher the hair, the keener the queen!

Signed a Lease But Never Moved In. Can I Get My Security Deposit Returned?