pdf
ON THE COVER:
What Would Jean-Luc Do?
news

The new PARD director has big ideas – to realize them, she'll have to raise big bucks

Point Austin: Stepping on Your Punchline

Maybe they could use a few more members after all ...

Pearce community is trying to work through the closure crisis

Will the Irving decision affect elections in Austin?

Can Austin Avoid the Stigma of Dirty Air?

State Board of Education strikes again!

Friends with money giveth to Perry and Hutchison

Perry and the Demise of Safe Passage

Is the D.A. Hiding Evidence?

Judge Baird wants some answers from an assistant district attorney

Dicking around with the 'Dillo

Have Food, Will Travel

Black Sheep Lodge is still pulling in a crowd every night, despite the fact that the liquor license has arrived, so you now have to pay for your drinks

Catching Fire: How Cooking Made Us Human 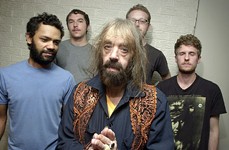 March of the Flower Children

Coma in Algiers hand-delivers its goods, while Tia Carrera and Ignitor pay their last respects to Room 710

Watch Out for Rocks

Beasts With Hearts of Gold

Til We're Blue or Destroy

Til We're Blue or Destroy
screens

What Would Jean-Luc Do?

In a post-digital world, is cinema dead or just rebooting?

After Life and Liberty

This romantic comedy is a deeply funny, seductive, and surprisingly honest dramatization of the ways we snooker ourselves into incompatible love.

In this formulaic battle of the sexes, no one will be mistaking Katherine Heigl and Gerard Butler for Hepburn and Tracy.
arts & culture

Coming soon to a computer or TV screen near you: dance and classical music from ARE?

Even in the record heat, Zilker Theatre Productions' revival delivers a good time

Page Two: Variation on a Theme

Following the logical threads of a revolution

Set up the spankin' machine for Charlie's and 'Bout Time!

Composting Your No. 2s? Austin Officially Welcomes the 'Humanure' Movement