pdf
ON THE COVER:
Outside the Bachs
news

Five candidates for mayor jockey to be first among equals

The mayoral candidates, at a glance

The Rest of the Dais

The candidates and issues of Places 2, 5, and 6

Throughout her career, Strayhorn has sung the same song, each with a different beat

It's put up or shut up time at the municipal polls

Who's voting for Strayhorn, and why?

Can school accountability measure save Pearce and Reagan?

McLeroy Gets a Dressing Down

SBOE chair called on the carpet

Quickies from the Capitol

A Good Excuse to Grandstand

The usual anti-abortion bills sally forth

The Tim Cole Act increases compensation for the wrongfully convicted

Whittling Away at SBOE's Power

Where Did Austin's Affordable Housing Go?

One man's music is another man's noise complaint

AISD: A Chat With the New Super

Time to End a Banker Boondoggle That Hurts Students; and Making a Mockery of U.S. Representational Democracy

Neo-Mexicano has arrived in Austin via La Condesa

Local food events for May 3-9

Austin is drowning in coffee, and the Blue Bonnet Cafe is Still Cookin' After 80 Years 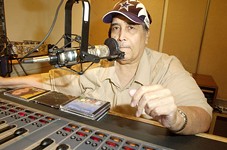 Part 1, the overview, of Latino music in the Austin mainstream

Mayoral candidates sound off on the future of Austin music, Scott H. Biram gets back on his feet, and unveiling the lineups for the Austin City Limits Music Festival and Pachanga Latino Music Festival

Making 'Room' in the Cult Canon

Glass: A Portrait of Philip in Twelve Parts

It's appropriate – hell, it's necessary – that a documentary about Philip Glass provide sound as crisp and clear as the sharpest images onscreen, and this one does, with aural textures you can almost feel against your skin

Bea Arthur blazed trails in Maude. But is there room in contemporary TV for strong, feisty, older women?

This moving message film tells a story about a miscarriage of Texas justice.

An animated tale of a peace-loving race of creatures known as Terrians, who are invaded by alien humans.

This film is set amid the world of underground street fighting where the plays bob and weave for love and respect.

Ghosts of Girlfriends Past

Matthew McConaughey stars as an oily womanizer who does an about-face in this purported romantic comedy.

Michael Caine stars as a magician who's come to live in a retirement home when his mental faculties start to fail.

This suburban melodrama arrives with an impressive pedigree but little originality.

This unusual U.S.-Mexico border film is a thriller starring Simon Baker and Paz Vega, and it's screening in Austin prior to its national release.

Idris Elba and Beyoncé co-star as a married couple whose happy life is disrupted by a stalker.
arts & culture

Classical sounds new when Austin artists do the composing

It's not an easy time to open a gallery, but for Lesley Nowlin, it's the right time

Texas art isn't an oxymoron, and the members of CASETA will gladly tell you why

With this play about theatre and tigers, the Rude Mechs earn their stripes forever

The play tempers talk of ideals and suffrage with lots of wit, action, and absurdity

Camp Bosworth: Three Day Bender and Other Stories from the Big Bend

Gay Place is all splashy for Splash

While the Style Avatar is away, the Avatarette shall play

Both pro wrestlers and their fans are looking for the same thing: acceptance

At the Sea Life Center in Port Isabel, each tank serves as a window to the underwater world off the Texas coast

Luv Doc Recommends: Next Up: U18 Showcase