pdf
ON THE COVER:
Rocketing Through Hard Times
news

Reasons to Conserve: The Message

Reasons why the city should forestall WTP 4

Local Reps and Their Committees

Shining a light on the Texas judiciary

On the Road (and Rail) Again

The Statesman and its suitors, and the TV shuffle

Another SBOE Voice for Creationism

The SBOE's Ken Mercer chimes in on creationism and evolution

Running the city is easier campaigned than done

At campaign time, the policy choices just get tougher

What's the Word for Wall Street Greed?; and Why America Needs a Truth Commission

Food, art, politics, and culture come together in the garden for local restaurants and for Austinites, as well

Food, art, politics, and culture come together in the garden

A Resurgence of Urban Agriculture

Join in for another Artz Rib House fundraiser, and get involved in making Fat Tuesday official 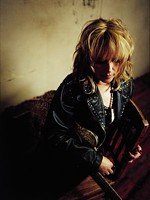 Buzzing with the queen of the bumblebees, Lucinda Williams

Paying tribute to the Texas Tornado, working out at the Music Gym, and Trail of Dead's Justice for all

Songs From a Dutch Tour: The Book

The American Con of Bootstrap Optimism

Kelly Reichardt talks about Wendy and Lucy, her prescient tale about a girl and a dog, a rock and a hard place

KEYE's Mr. Fix-It can help you with your DTV conversion troubles

Confessions of a Shopaholic

Profligate spending may be out of step with the times, but don't short-sell the comic charms of Isla Fisher.

This new teen sex comedy is both sexist and prudish.

From the director of Old Joy comes this minimalist story about a girl (the elfin Michelle Williams) and her dog getting by in society's margins.
arts & culture How do you get to Carnegie Hall? In this case, back up a Beatles cover band.

Have marathoners found the Answer?

Turn day into nighttime and night into daytime