With five council seats open, mayor and Place 1 look like the headliners

The city PACs work the background of the campaigns

Are we flying boldly forward or going back to the future?

TFN Looks at the Lege Demagogues

Straus Offers Welcome to His House

Solar bills are back by popular demand

Have we got plans for you

In clearing Timothy Cole's name, Travis Co. judge does what Lubbock officials refused to do

The Upside to Downsizing; and Home Depot Exec Blows a Gasket 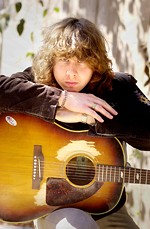 Marcia Ball turns 60 in style, Bill Baird finds himself in song, and more confirmations for the Austin Music Awards and
SXSW 09

Willie Nelson & Asleep at the Wheel

Willie and the Wheel

The Truth According to Ruthie Foster

Nothing Happens for a Reason

Valley of the Cyclops

The Eastern Sea, This Will Destroy You, Lymbyc Systym, Wine & Revolution, La Snacks

Is the Texas film scene resuscitating itself?

The Academy gets animated.

This spicy Thai actioner comes from the director of Ong Bak.

The latest coming of Our Man in the Hockey Mask was filmed in Austin.

He's Just Not That Into You

A Baltimore-set romantic comedy roundelay based on a bestselling self-help book.

Steve Martin returns as the bumbling Inspector Clouseau, but no Beyoncé in sight. Smart girl.

Grrl Action is getting its very own space next to the Off Center: The Off Shoot

Of the play's three stories about people dying, only one comes to life in this show

Page Two: First Do No Harm

Stephen has his hard hat; now all he needs is an Indian, a cowboy, an Army guy, and a motorcycle cop