pdf
ON THE COVER:
The Informant
news 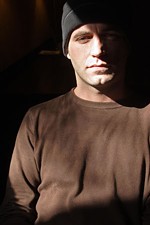 Revolutionary to rat: The uneasy journey of Brandon Darby

Point Austin: 'Embrace What Is Right'

On Obama, what it means … and what it doesn't

City Hall Hustle: And They're Off!

On the Lege: Senate Fight

Dems lost the debate on the two-thirds rule, but not without a fight

Sunsetting TYC: Will It Stick?

Yet another setback for death row inmate Rodney Reed

A Lesson in False Confessions

Why the Homeland Security Department Is So Beloved; and Put Some Bite in Our Financial Watchdogs 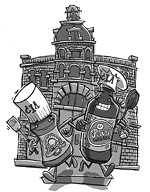 The History of the Peloponnesian War

Jazz Offerings to the Schnauzer King 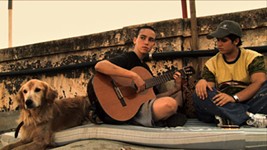 Secular Cinema in the Holy Land

Screenwriter Noah Stollman talks about how to make a movie about Jerusalem without taking on 2,000 years of tumult

Benicio Del Toro on the method, the madness, and the merchandising

TNT's Trust Me could use a dose of David E. Kelley

In this Bollywood action comedy, a mistaken identity takes a humble cook on a crazy journey from India to China.

Steven Soderbergh’s filmmaking legacy is his aesthetic daring, and his latest – as massive and imperfect as it is – just might be his most daring work to date.

Hotel for Dogs is a family-friendly operation, and all the pooches in the pic provide ample opportunities for poop jokes.

This fantasy adventure, in which characters come to life when the books they're in are read aloud, boasts a strong cast and an ingrained love for reading and the well-told tale.

This horror film is a full-on, old-school, gore-hound heaven – a supersaturated arterial goregasm with zero socially redeeming values for anyone other than first-year med students.

Broadway's Back (but that's not all)

Matt Stokes: These Are the Days

A local operatic production gets a trip to the ball: a showing on public television

Warren Oates in the Economic Crisis of 2008

If hot-rodders can still remake battered old cars into things of brazen beauty, the rest of us can get to work remaking America into something equally bold and brave

The Texas Panhandle has many treasures to behold

This weekend honors the works of two pivotal Austin lesbians