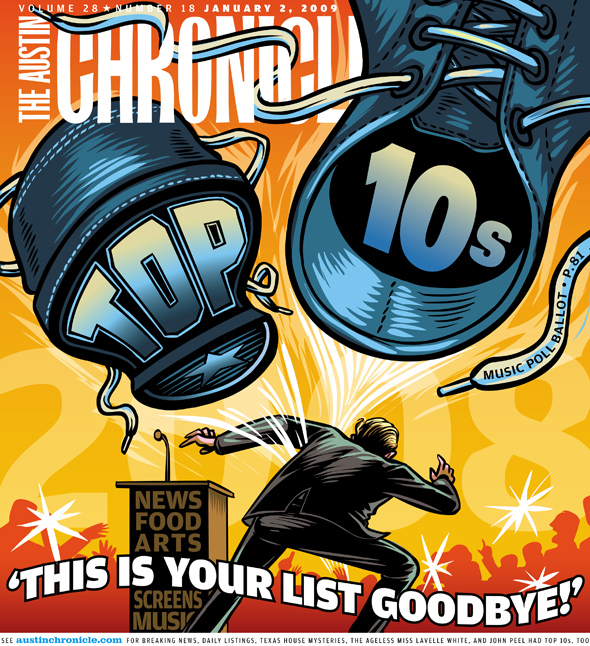 BY JORDAN SMITH AND RICHARD WHITTAKER

City to Firefighters: No More Talks

The AFA asks to resume negotiations – Ott says no

A minicalendar for all those who resolved to be a good citizen this year: Jan. 1-8

From soup to nuts, the local markets proved all-too delicious

The Wild and Wacky World of Wine Widgets

Top 10 Local Products in My Kitchen

Prove It All Night

The Year in Rewind

The Chronicle looks back at 2008 at the movies

A quick science lesson before the best of 2008

Ah, you know the rest

Top 10 Theatrical Treasures and Pleasures of 2008

Top 10 Parts and Wholes (In No Particular Order), Plus One Standout

Top 10 Musical Triumphs, Plus Evidence That Austin Is Innovating the Classical World

12 Steps to a More Dysfunctional Christmas

An introduction, then a list of lots of cool things, shoved into 10 slots, that are not necessarily related to 2008

Gay Place recounts 2008: the year of hope and impact

The sex life of daddy longlegs, the real age of Beethoven, and more

Can I Change My Name Without a Lawyer?

The Year in Sports

A look back at 10 notable events in CenTex sports, '08 style