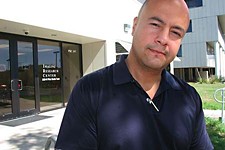 Why I'm going to vote for Prop. 2 (even though we endorsed against it)

BY WELLS DUNBAR AND RICHARD WHITTAKER

Can Everyone Just Calm Down?

Schools Gear Up for E-Day

What the Polls Show

Who's on first? Depends on what day it is.

You be the judge: Is it time for Law to get on down the road?

Voter Applications on the Hook in Harris

Republicans Are So Naughty

Cornyn & Co. is stealing our stuff!

Nathan Winograd makes his case for 'taking back' the animal center

State Child Protective Services took more than 400 children into custody after the FLDS raid last summer; they’ve since dropped 415 of those cases

Red Cross tries to replenish coffers that were drained in 2008

Reagan High Stands Up and Fights

Don't drink and drive: APD's Art Acevedo is out for blood on Halloween

Making Designs On a New Library

From the statehouse to D.C., the journey begins with a single vote

A Knee-Jerk Attack on Poor People; and Why Are We Bailing Out Extravagant Executive Pay?

Away From the Book Fest

A Fresh Look at Halloween Candy

Head to Lammes and other local shops for your Halloween goodies

Celebrate Día de los Muertos with sugar skulls from the bakery, or make your own

Head to Big Top for all your Halloween candy needs

The name says it all

The Texas Hill Country: A Food and Wine Lover's Paradise

A little bit of everything from Hill Country artisans

Market-Fresh Mixology: Cocktails for Every Season

Made-from-scratch cocktails for the conscientious consumer

Eat, Memory: Great Writers at the Table: A Collection of Essays From The New York Times

Shine On: 100 Years of Shiner Beer

A history of Shiner full of heartwarming stories and hilarious anecdotes

Heirloom Cooking With the Brass Sisters

Discover America through food with the Brass Sisters

The Shameless Carnivore: A Manifesto for Meat Lovers

A book for shameless but conscientious meat lovers everywhere

Raising Steaks: The Life and Times of American Beef

Mourn closing Austin eateries, but check out the new ones, too

Book Review: Living in the Woods in a Tree: Remembering Blaze Foley

Ben Kweller saddles up in Austin, Willie Nelson and company share one last night in the Backyard, and Bavu Blakes and others gear up for election night

Loud Is the Night

For Mature Audiences Only

Clint Eastwood directs Angelina Jolie in this Depression-era-set mystery/thriller/proto-feminist drama based on a true incident.

This new Bollywood film set amid the world of haute couture tells the story of one supermodel's rise, fall, and resurrection.

In this Bollywood comedy sequel, a housewife's suspicions about her husband's infidelity lead to a preposterous cover-up.

British director Mike Leigh's latest is an uncharacteristic story about an indomitably joyful woman – a lovely state of being, perhaps, but not necessarily of dramatic interest.

College approaches, but that's no reason to stop singing and dancing.

Anne Hathaway tears up the screen in Jonathan Demme's new film about a self-absorbed woman who wreaks family havoc while out of rehab to attend her sister's wedding.

Director Guy Ritchie once more delivers a kinetic and consequence-free tribute to the criminal lifestyle.

Jigsaw and his traps live on for another installment of demented torture.

Apart from its shape-shifting fungal porcupines from outer space, this horror film has little else to recommend.

This film about the human toll of Hurricane Katrina is one of the best and most inspirational things to come out of the disaster.

Robert De Niro stars in this Barry Levinson comedy as a Hollywood movie producer beset with problems ranging from two ex-wives and unhinged actors and directors to perpetual worry.

Just in time for Zach's diamond anniversary, a pair of million-dollar donations

In this puppet retelling, the monster is a hybrid of human and plant tissue

Cyndi Williams pens a gothic ghost story, and what a demented, dramatic tale it is

Is this stage adaptation playing George Romero's zombies straight or for camp?

Susan Collis: Why Did I Think This Was a Good Idea

A series of shapes that all fit together, although not like jigsaw pieces

Love is in the air, and it is distinctly Paisley-shaped

Finding the rhythm of footbag

Gay up that vote, y'all

Controlling coyotes with chocolate, the Snickers 'Marathon,' and more