pdf
ON THE COVER:
The Choice Is Yours
news

Taking Back the House

Texas Democrats say this could be their November

Democrats and Libertarians find common ground in their grudge against Republicans

Davis Stays on the Ballot

Despite attempts to kick her off, Dem candidate Wendy Davis will stay on the Senate District 10 ballot

Allure of the Poll Dance

We can't look away from the poll numbers, though maybe we should

Dems Rake in the Dough

Getting a Ticket Beats Going to Jail

Klein in Town to Talk 'Shock'

'Killer' Keller off the hook for closing courthouse doors

Point Austin: Ounces of Prevention, Or

How is a Health Clinic Not Like an Investment Bank?

Sampling bánh mì all over Austin

This weekend, head to Gruene for music and wine or Salado for chocolate and art 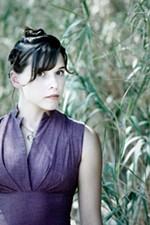 Up From the Skies

Black Belt of the Rodeo

Paula Nelson will kick your ass

Making the rounds for the third annual HAAM Benefit Day, while the Black Angels walk with a zombie

Ladies and Gentlemen, the Fabulous Stains

Tim, Pleased to Meet Me, Don't Tell a Soul, All Shook Down
screens

The Comedy Writer Is In

Stepping into The Office of Greg Daniels

Meet Me in the Middle of the Lake, My Love

Musicians and Comedians, In Perfect Concert

'As Long As There's a Record Deal, We'll Always Be Friends'

The Stuff That Cubicles Are Made Of

Triumph of the Underdog

Choosing sides between KXAN and Time Warner Cable, and a different kind of Choice on PBS

Michael Moore and left-leaning Hollywood are the subjects of this spoof that's missing only one thing: comedy.

This quiet, contemplative gem of a film paints a painfully accurate portrait of familial love, loss, and healing-by-degrees among the migrant communities bordering San Antonio.

It may be a family-friendly trifle, but it's nevertheless a silly, if guilty, pleasure to watch.

A Depression-era biopic about the formative years of the influential Christian evangelist Billy Graham.

Despite some inventive production design and a comically villainous turn from Bill Murray, this film based on a young-adult novel never really picks up much steam.

This new Bollywood film is a fantasy tale.

Keira Knightley stars as the titular Duchess, a legendary wit and arbiter of taste, but the film is a curiously inert: a whole lot of pomp and incircumstance.

The story of Ernie Davis, the first African-American Heisman Trophy winner, is full of heart-pumping stadium heroics and quiet acts of dignity.

How to Lose Friends & Alienate People

This comedy starring Simon Pegg is based on Toby Young's memoir about working at Vanity Fair.
arts & culture

The Choice Is Yours

A Transcript of Passing Fancy

The Austin playwright unearths the inspiration for her spooky new play

Your tricky riffin' Style Avatar gets all pre-Halloween grim and invites you to his birthday party, which was not supposed to happen

Sausage lovers will be in hog heaven at Fischer's Meat Market in Muenster, Texas

What does this Pride Coalition purport to do if not PRIDE?

There's an adage in sportswriting: the smaller the ball, the better the writing – which doesn't bode well for soccer

The Nuts & Bolts of Jury Duty