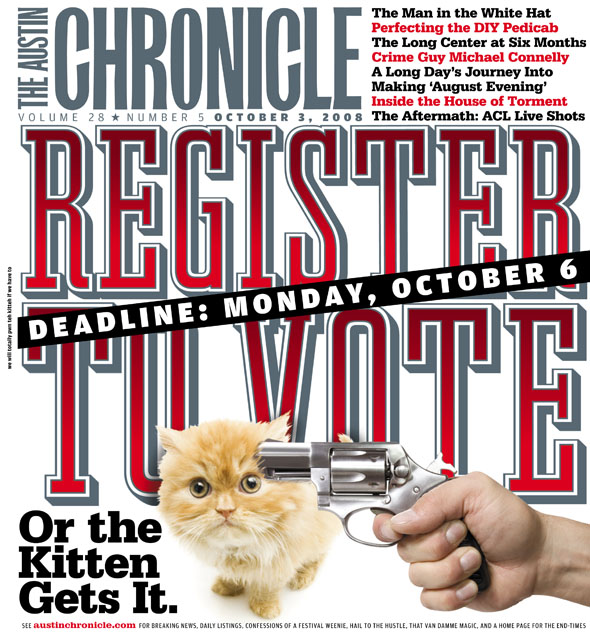 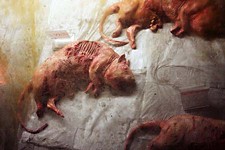 It Came From the Back Yard

Our man on the haunted house beat, Richard Whittaker, takes a look backstage at Austin's House of Torment.
news

The Man in the White Hat

Larry Joe Doherty rides into the battle for CD 10

Breakdown of the 2006 General Election

Voter registration's only the top of the iceberg – here's the rest of your civic agenda for the week, Oct. 2-9

So You Think You're Registered?

Thousands of voters mess this up every Election Day. Do yourself a favor, and double-check your registration before the Oct. 6 deadline.

BY NORA ANKRUM AND LEE NICHOLS

Want that little something extra with your voter registration card? Got to Burlesque the Vote.

No Exceptions for Ike-Displaced Voters

Say Goodbye, and Watch the Debate

The TCDP bids adieu to district judges Jeanne Meurer and Margaret Cooper, then staggers over to the debate-watching party

Gomez to Lead Cap Metro Board

Timothy Cole died before his false conviction could be overturned, but his family – and the victim of the real attacker – still seek closure

Point Austin: Money for Nothing

After the bailout, what then?

When the joint is hoppin', the cool cats and kitties come knockin'

Chocolate That Isn't; and Bush's Farewell Gift to Chemical Bosses

Some local dining landmarks we missed, along with news on Hill-Berts and the Cocktail World Cup

Urban Roots gets kids growing vegetables and growing up, too

If a great wine under $10 is your Holy Grail, the search is over

Oktoberfest celebrations, dinner at the Texas Culinary Academy, and more

Songs in A&E: Recovering from the 2008 Austin City Limits Music Festival and revving up for the third annual HAAM Benefit Day

Nakia and His Southern Cousins

Ed Harris takes a turn behind the camera again in this Western in which he co-stars with Viggo Mortensen, Renée Zellweger, and Jeremy Irons.

The 1999 protests at the WTO meeting in Seattle provide the backdrop footage for this character drama.

Julianne Moore brilliantly leads the strong cast in this sci-fi parable which takes us to the depths of human degradation before letting in the light.

God helps a firefighter, played by Kirk Cameron, to repair his marriage.

Based on the true story of Robert Kearns, who invented the intermittent windshield wiper only to have his idea stolen by the Ford Motor Co., is a real David and Goliath story.

This new Bollywood film is an action thriller.

Michael Cera and Kat Dennings star as the titular bridge-and-tunnel kids at the heart of this New York City after-dark romantic comedy.

This French box-office sensation is a send-up of Sixties spy films.

Bill Maher walks with the angels in this documentary, which he uses as his pulpit to proselytize the gospel of doubt.
arts & culture

After a stellar career in San Francisco, a choreographer follows her heart to Austin

Page Two: To Whine Is to Love Again

The GOP masterfully weaves a tapestry of deceit

Stephen remakes his nephew: Can the world handle another style-happy Moser?

God, we love Barney Frank ... (and the bailout does have its bright side)

At 10 years old, Robert D'Lorm didn't learn how to box to beat up the bullies at school; he learned how to box so he wouldn't have to

A surfing president, oil by accident, and more