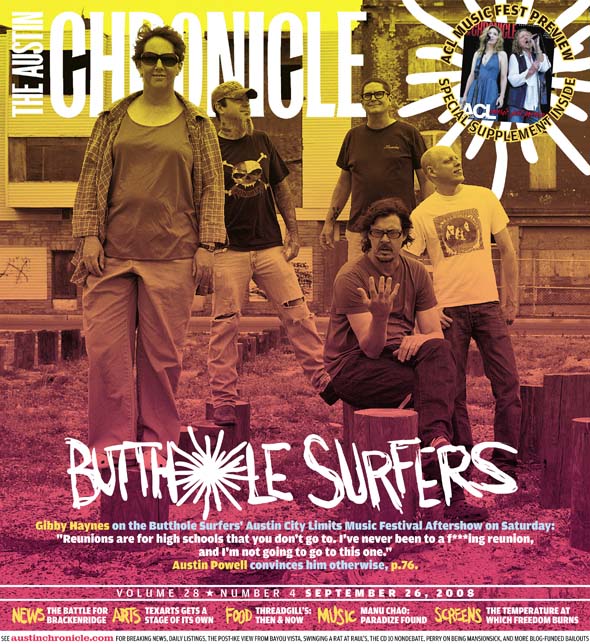 pdf
ON THE COVER:
Out of the Mouths of Children
news 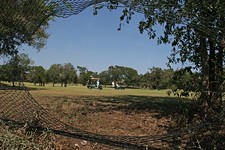 West Austin readies for another battle over redevelopment

Golf pros Tom Kite and Ben Crenshaw agree on a lot of things, except the future of Lions Golf Course

On one side, you have the UT Regents and proponents of redeveloping the Lions Golf Course. On the other side, you have a long list of folks who want to preserve a piece of Austin history.

Obama wasn't there, but Benjamin McKenzie was

Hurry, hurry! Register to vote before the big day.

Libertarian prez hopeful loses effort to keep Obama and McCain off the ballot.

Postpone the Debate? Let's Debate It ...

Politics Take Back Seat to Ike

Partisanship goes out the window in wake of storm

After months of testing, the state knows a lot about who doesn't match the new DNA evidence

Overheard at the broadcasters schmoozefest: Crisis? What crisis? Have some candy.

Austin's Energy Future ... and You!

The upcoming legislative session looks to be a doozy

Walters appears to be winning the war on fantasy

A press conference video of Drug Czar John Walters extolling the results of his anti-marijuana campaign.

James Galbraith on the prospects of an economic bailout

City Hall Hustle: It Will Be Mayor May Before you Know It

Plugging the holes in the city's campaign finance ordinance

Arming the World; and Another Bush Mess to Clean Up 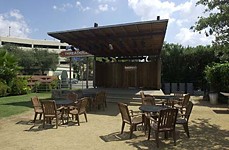 If the ACL food court isn't enough, check out these nearby eateries

Eat chiles to your heart's content at the Sunset Valley Farmers Market, and head to the swanky Taste of Sixth Street benefit in support of local businesses

Out of the Mouths of Children

The return of the Butthole Surfers – don't call it a reunion!

Manu Chao, changing the world one neighborhood at a time

Gearing up for the 2008 Austin City Limits Music Festival

We'd Rather Have Nothing Than Settle for Less

Middle of the Morning

The Houston kid on Sex and Gasoline

Back to the future of indie rock

Pushing past his Eleventh Hour

This isn't his first rodeo

Mastering the language of Afrobeat

The Shepherd's Dog roams out to pasture

The best of John Fogerty

After the gold rush

Ladies and gentleman we are floating in space

Meeting at the crossroads of American music

The Dirty Old One Man Band recovers from the road

When the sun goes down

ACL's Food Court Continues to Expand Its – and Our – Horizons 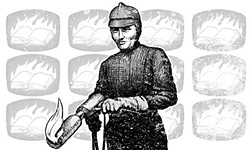 A New Vision of Television

IndiePix Rolls Out a Two-Disc DVD of 'Hell on Wheels'

Best known for his vampires, devils, and death-dealers, F.W. Murnau traffics here in the evils of capitalism and human cruelty

Choke, a forgettable adaptation of Chuck Palahniuk’s 2001 novel, features Sam Rockwell as a man of many hats, all of them off-putting.

Too bad it's autumn: With its frenetic car chases; near-erotic fascination with explosions, gadgets, and guns; and disposable storyline, Eagle Eye is the very definition of a summer blockbuster.

The film tells the story of a volunteer American rugby coach who inspires his team.

This fine ensemble piece – thoughtful and cheering, even giddy in stabs – presents a seriocomic, sympathetic portrait of a pot-growing family operating along the coast of Northern California.

I Served the King of England

Pixar this animated outing isn't, but neither is it Mary Shelley's VeggieTales.

Johnny Got His Gun

Spike Lee fights the good fight but loses the battle in his bloated and muddled World War II epic that pays tribute to the Army's Buffalo Soldiers.

Dane Cook stars in this rom-com about a serial womanizer who accidentally falls in love with his best friend’s girl.

Alan Ball's film is guaranteed to discomfit and dismay with its dangerous plunge into an adolescent girl's discovery of sexuality and self-identity.
arts & culture

A Stage of Their Own

TexARTS has yet to find its audience in Austin, but outside it is another story

Don't fret over getting this choreographer's dances, and you'll be richly rewarded

Vestige Group has the pieces of an interesting puzzle, but most don't fit together

A two-man, two-nation photo show where everything new is old again – and vice versa
columns

The GOP masterfully weaves a tapestry of deceit

While Stephen is fetching, he didn't fetch much

A young man was bashed on the bus

Shana Young may be only 14, but she'll leave you in the dust out at Iron Rock Raceway

Are you registered to vote in November election?