pdf
ON THE COVER:
Talkin' the Walk
news 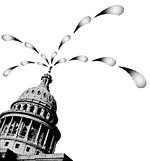 Before the Well Runs Dry

The city moves toward conservation, but is it moving fast enough?

Keeping Off the Grass

Don't be a Lance Armstrong! Quit your lawn habit with a little help from xeriscaping.

A progress report on the city's water-saving initiatives

Biomass: A Question of Wood, Not Could

Council will vote this week on a proposed wood-waste-fueled power plant, but just because it's carbon-neutral doesn't mean it's perfect

After a four-year battle with the state, Bebe Gaines wins the right to work with foster kids again

Media Watch: Anybody Want to Buy the Bat Cave?

Read all about it – 'Statesman' goes up on the block

Another Court Defeat for SOS

Polling in Senate Race All Over the Map

Who's ahead in U.S. Senate race? It depends.

Houston, we have a chance to take back the Texas House.

Founder of Students for a Free Tibet takes his message to China, then gets booted back to Texas

The Presidential Library Scam; and Structurally Deficient Bridges and Politicians

The piquant history of an American hot sauce

The Best Micheladas in Austin

Let Our Commercial Bottler Winners Add Some Spice to Your Cooking

Beat the heat outdoors with these fiery prize-winning complements

BY VIRGINIA B. WOOD AND KATE THORNBERRY

Original recipes featuring past winners from the Hot Sauce Festival

Check out a map of Waterloo Park

Inside the Judges' Table

The most delicious things are happening in South Austin this summer

The Good Times Ain't Over

This Song Is for You

Greezy Wheels shift their gears for a midnight ramble, Black Joe Lewis preps for the Chronicle's annual Hot Sauce Festival, American Analog Set's Andrew Kenny rewinds back to Austin, and the lineup for the 2008 Fun Fun Fun Fest is in

Rules of Hell, Nostradamus, The Formation of Damnation The Chaos of Eros

Playing for the People

Slap Shot and sweaters in August, oh my

All the busted heads and blasted gaskets can't turn this makeover of a cult classic into anything but a real drag.

In this smart adaptation of Philip Roth's A Dying Animal, Ben Kingsley and Penélope Cruz turn the table on the standard May-December romance.

The manic comedian Steve Coogan plays a high school drama teacher who pens a scandalous remake of the Bard's classic in an attempt to save his Tucson class from budget cuts.

Limp Bizkit's Fred Durst directs Ice Cube and others in this sports movie about the first girl to play Pop Warner youth football.

Spooky stuff crosses over from the mirror world to the real world, and it places Kiefer Sutherland in a world of hurt.

Equal parts sweet and perverse, this Scottish coming-of-age story about a teenage voyeur is unpredictable and compelling and premieres exclusively in Austin.

Rainn Wilson's goofy, puppylike charm makes this comedy about overage, overweight rockers passing on the glories of rock & roll to the next generation a palatable exercise.
arts & culture 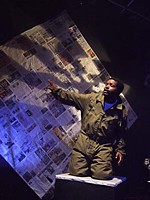 A member of the first family of acrobats on circus life, danger, and that famous name

How we succeeded in business without really trying

Is a punt better than a drop kick? Check out these exciting calendar listings, courtesy of Your Style Avatar.

It's back to school, fool. Find your LGBT allies!

If an athlete's character is defined by failure, not success, what does a manic obsession with success say about the character of a nation?

Avoid hassles and disputes with your new landlord