pdf
ON THE COVER:
The New M.O. at City Hall
news

The New M.O. at City Hall

City Manager Marc Ott opens up on his new job, his new city, and his philosophy of governance

The new city manager on council initiatives, city planning priorities, and the change in the weather at City Hall

This election year, the populist message just might pay off

The L Word: Not just for lesbians any more

A Q&A with the author of What's the Matter With Kansas? and The Wrecking Crew: How Conservatives Rule

APD Commander Gets Job Back

What happens when you don't report a comment you thought discriminatory, and then the comment itself is deemed not discriminatory after all? You get fired – but not for long.

Eastside Memorial It Is

The wheels are in motion for an urban rail system

Budget decisions are about money ... and justice

Street closure debate comes to a head over Batfest

Are We in Iraq to Stay?; and Time for Percolate-Up Economics As long as the quality is akin to Torchy's, Austin can never have too many taco joints
music

Shapes Have Fangs bite into a Kinks klassic

Five Faves From the Kinkdom

Across the Great Divide

Hacienda's Abraham Villanueva keys in on the Band

The Sword and Metallica ride the lightning at Ozzfest, while Kanye West and Hope for Heroes lend a helping hand to U.S. veterans 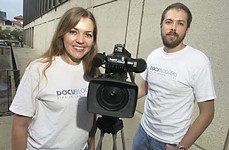 The Community Turns Its Camera On

Once More Unto the Breach

Austin Studios gets an upgrade, plus the fall festival season begins

Stuff the cork back in: This wine movie was sold before its time.

Fly Me to the Moon

This animated film is a simple parable of spirited can-do-ism, in which a trio of young houseflies semiaccidentally tags along on the Apollo 11 moon shot.

The only important things in this new animated epic is that viewers be blown away by the endless and pointless laser battles and that girl power comes into its own.

Take, with a very good performance by Minnie Driver, is a dreadfully misguided movie whose story of redemption is utterly irredeemable.

Instead of entering the jungle to find the heart of darkness, Ben Stiller goes in to take aim at the Achilles' heel of Hollywood: its utter pomposity and self-importance.

Woody Allen's newest is by no means a bad film, but it’s irrefutable evidence that Allen has aged – or cloistered – himself into irrelevance.
arts & culture

Comic-Con has gone Hollywood, but Austin's comics pros say it's still the place to be

Teatro Vivo: Giving Voice to Its Own

In a departure, the company mounts a program of plays by four of its artists

Long Center: Playing Without a 'Chaperone'

Judy Thompson-Price: A Maker of Dances Gets Her Due

Sequel to HIT. suffers from some trite dialogue, but hang on for that final twist

More than ever, the Chronicle is what people make of it

A look into the darker side of the Olympic Games