pdf
ON THE COVER:
Living With 'Monstrosities'
news 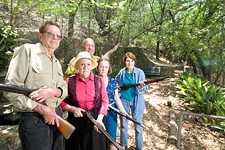 From San Antonio to Austin and back again

A Dose of Integrity for Texas Criminal Justice

The Court of Criminal Appeals has created an Integrity Unit – but can the CCA really be part of the solution when it's so much a part of the problem?

Yellow Bike Project moves two semi-trailer trucks' worth of stuff – minus the trucks, of course

Watch the Yellow Bike Project folks, plus 75 of their friends, move two semi-trailer trucks' worth of stuff by bike! And listen to a jaunty tune!

Not sure what a "goose-necked trailer" is or who'd be crazy enough to haul one behind their bike? See for yourself in these pics taken by Daniel Mottola during last weekend's big bike move.

Mansion fire not the 'finest moment' for DPS

On tour with his new book, 'What Happened,' the former White House press secretary made a hometown pit stop

Now That's a ROT of Money

Was it OK for a deputy to shoot a suicidal man holding a gun to his own head? The 5th U.S. Circuit Court of Appeals will soon weigh in.

Eastside residents balk at proposed mobile-home park for the homeless

What can the City of Brotherly Love teach Austin?

And we wonder why nobody votes

Making a bonfire out of a campfire

Wrecking the Airline Industry; and Rewriting Some PATRIOT Act Stupidity

The Zealous Pursuit of the Perfect Cocktail

'You shake a drink to wake it up, not to put it to sleep'

Joe DiMaggio's Italian Chophouse has perfectly made drinks, a solid selection of fish and steak, as well as an ambiance that suggests Joe and Marilyn are nuzzling in the next booth

We could not be happier with the arrival of Sichuan Garden, even if it is in Round Rock
music

An abridged guide to Boris

BY MARGARET MOSER AND CHIP TAYLOR

All I Intended to Be

The Adventures of Grandmaster Flash: My Life, My Beats

Jamaa Fanaka on racial myths and the ailing film industry

The City of Angels, Air-Kissing Austin

TV Eye enters week three of no TV (okay, with an itty-bitty cheat)

The Children of Huang Shi

This would-be epic tells the story of George Hogg, an English adventurer who saved the lives of Chinese orphans during the Sino-Japanese War of the 1930s and Forties.

Flight of the Red Balloon

This bracingly good Norwegian film is many things at once: portraits of mental illness, obsessive love, the uneasy transition from punk rock youth to “upstanding” adulthood, and fraternal competitiveness.

Using a combination of historical footage and modern-day scenes, this documentary about Estonia's independence movement is a welcome shot of unsentimental optimism.

In this new Hindi movie, four orphaned children are blessed with a nanny.

By turns sad, hilarious, exciting, and ultimately, hopeful, this is a film of Great Truths masquerading as child's play.

Based on Mark Millar’s ultraviolent comic-book miniseries, Wanted isn’t so much a movie as it is a parade of fast cars, big guns, heavy metal guitars, exposed cleavage, and tests of masculinity.
arts & culture

Titling a play can sometimes be a tenuous proposition, as was the case with Tom White's most recent work

KMFA: The Man Behind 'Classically Austin' Leaves for Portland

Jack Allen, the man who recharged Austin's classical radio station, is off to do the same for a West Coast station

'Bomb Shelter: or the Modern Pinocchio'

The Pirates of Penzance

While the staging could use more swash with its buckle, this take on the G&S pirate musical succeeds where it must: with the music

Political arguments depend on mutual respect

It's not the NFL, but Arena Football League 2 is still professional football, and 'you gotta take pride in what you do'

Sex equals money, the Beatles consider a reunion show for $3,000, and more