pdf
ON THE COVER:
Salsa, Cumbia, Merengue, Everything
features

Local biker clubs share the secrets of the open road

The Bard of Blast

Welcome to the Motordrome

One of the last Wall of Death barrels comes to town

We Can Rebuild It

Build a bike in two days

Bikers' best bets on the highways and byways

Your calendar for some wheelie great events

What's on the Slab

Texas roadhouses are far from middle-of-the-road

As Austin Pride revs up, will its soul get lost on the roadside?

Austin spots so hot, they're flamin'

The party goes on all month long ...
news

When digital TV arrives next year, you may not notice

Dems in Austin: Taking the Next Step

The State Convention looks ahead to November

Joe "Thundersticks" Jaworski revs up his bid for S.D. 11 and the Bad Precedents

Sessions: From Vodka to Voter ID

The Cat Did It: WilCo off the Hook in Shelter probe

Animals blamed in abuse case (and for squealing to the pigs)

Immigration comes calling at the jailhouse

From Philadelphia to Austin, the air is burning

Exciting things to see and do at this week's council meeting

Blackwater's Reward; and Who Benefits From Cloning?

Fragrant entertainment is to be had at Blanco's Lavender Festival

Freshness and simplicity brighten palates in a former steak house

What do Grupo Fantasma, Brownout, and Ocote Soul Sounds have in common? Prince, Maceo Parker, and Larry Harlow!

The Best of Lydia Mendoza

Music to Stand by the Fireplace To

Talking to the River 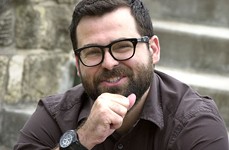 The Present Beware! The Future Beware!

Suddenly, a reason to watch The View again

The Lovers & The Fire Within

Kind of funny and kind of scary, the lo-fi Baghead is not so much a horror movie as a four-character study of relationships and the drive to find meaningful work.

Finally, the Hulk is truly incredible. As of right now, it's Marvel's universe; we just live in it. CreateAustin: The City Gets the Plan

After two years in the making, the community cultural plan has been presented to the Austin City Council

A Funny Thing Happened on the Way to the Forum

Austin Playhouse's production of this early Sondheim musical features some strong work, but it also feels dated and safe

Throughout his latest group of collages, Letscher is always exploring how we work through ideas and emotions
columns

Page Two: A Threat and a Promise

Fossil Rim Wildlife Center, outside of Glen Rose, seems to get better with age

The Mary Tyler Moore Show airs somewhere in the world every hour of every day, solitary gaming, and more