A random sampling of our enviro-faves

Chris Searles lays down the beat for a sustainable local economy

So Many Crushes, So Little Time

A progress report on Austin's war on global warming

The Local Politics of Climate Protection

Won't you be my green neighbor?

Where You Can Stick Your Styrofoam

Cycled Plastics takes those recyclables that nobody else wants

Does this campaign chest make me look fat?

Will Candidates Fight the Good Fight?

Rise of the Bikes

Report shows Alternatives to Abortion program to be expensive, inefficient

An election year brings out the best in River City politics

A CEO Perk for Perks; Why Not 'Drink Local'? 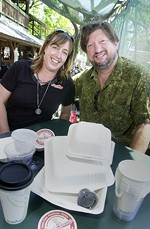 Four days of wining and dining with the best

Sad Songs Say So Much

Thank You Friends: An Almost There Records Salute to Big Star

Thank You Friends: An Almost There Records Salute to Big Star

What Doesn't Kill Us

The Serious Play in Saving the World

Gaming gets on the sustainability bandwagon

You Do It to Yourself, and That's What Really Hurts

Humans wreak havoc on Mother Earth, one disaster movie at a time

What to Watch on Earth Day

A Chinese student studying theoretical cosmology in the U.S. also has a lot of dark matter occupying his head, and not even the assistance of faculty wife Meryl Streep can prevent it from taking over.

The First Saturday in May

This documentary follows six horse trainers and their experiences on the 2006 trail to the Kentucky Derby.

There are plenty of comic moments and some seriously kickass fight scenes in this film that co-stars Jackie Chan and Jet Li.

A remake of the Eighties horror film in name only, Prom Night is a nearly bloodless slasher film with few surprises.

This new crime drama starring Keanu Reeves is directed by the screenwriter of Training Day and based on a story by crackerjack crime novelist James Ellroy.

Where in the World Is Osama Bin Laden?

Morgan Spurlock of Super Size Me fame chases after the world's most wanted man and comes up empty but fulfilled.

Even though this documentary about a choral group of lovable octogenarians whose perform songs by Sonic Youth and the Talking Heads sounds gimmicky, it is really about something to which we can all relate: our own mortality.

High spirits, drive, and lively interplay make this musical comedy a peppy peach of a show, a real swell treat

The debut of UT's Musical Theatre Pilot Project is a visual treat, well performed, and with plenty of fun moments

Cone's portraits of women, rendered as planes of color and shadow, are revelations of composition and rendering
columns

Page Two: Humanity in Its Habitat

As part of the natural world, we can be neither celebrated nor condemned

There's always room at the inn for Stephen

If one were to design an Olympic miler, 15-year-old Chelsey Sveinsson would be the result

Every dog gets one bite?