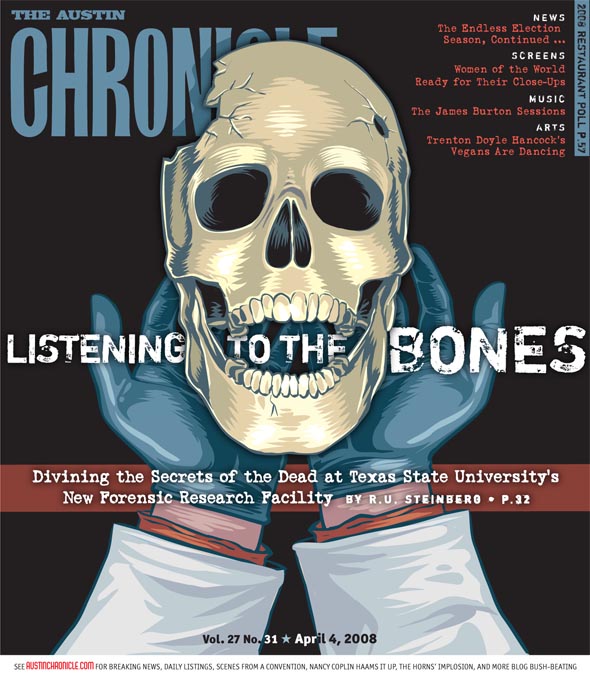 pdf
ON THE COVER:
Listening to the Bones
news

Listening to the Bones

What is forensic anthropology?

Travis County Dems have the spirit, yes they do!

A Bloodcurdling Day in the Neighborhood: Candidates woo ANC

Austin learns what to do when terrorists – and acronyms – attack

Changing Behavior One Bag at a Time

Down with plastic bags!

The next D.A. must meet a high standard

FEMA Still at It; and A Library for Bush Groupies

Wine of the Week: Albariño

The climate in the province of Pontevedra produces delicious Spanish wine

Cuisine de Cocktail at the Peacock

Why the crush at the Hole in the Wall on Wednesdays?

Consolers of the Lonely

One Hell of a Ride

The Secret Lives of Girls

The discussion of race in this country needs to continue, but who's going to do the talking?

The trial that resulted from the demonstrations outside the 1968 Democratic convention in Chicago were a media spectacle that is well-captured here.

There's some truly hilarious material (though not nearly enough) in this partially improvised movie about characters competing in a Las Vegas championship poker tournament.

George Clooney's latest (behind and in front of the camera) is awfully agreeable, but it lurches forward in fits and starts.

This girls adventure story that stars Abigail Breslin, Jodie Foster, and Gerard Butler bears the reminder that we should all be the heroes of our own life stories.

A comedy of mistaken identities provides the plot of this new Bollywood comedy.

The global revival of breakdancing is the subject of this documentary, which shows off the mad skillz of competitors around the world.

The Rolling Stones gather no moss in this Martin Scorsese-directed concert film that's playing on both IMAX and conventional screens.

Superhero Movie is a tonally confused spoof, which, for once, doesn't go far enough comedically.

The Year My Parents Went on Vacation

This Brazilian film is set against the twinned, opposing backdrops of the explosive 1970 World Cup and the human toll of the country's brutal military dictatorship.
arts & culture

Neighbors cheered the dedication of the Wall of Welcome, a community mosaic five years in the making

Charles Umlauf: One last sale for the city's sculptor

Long Center: Opening was, in a word, grand

In artistry and style, the gala opening for the Long Center was an evening worthy of a facility 16 years in the making

Naughty Austin's comedy doesn't provide deep insights into Damon or Affleck, but it's funny, with some darn fine acting

The dancers in this performance evoke nothing so much as machinelike armatures slowly, intermittently, gorgeously going haywire

The eight drawings of baseball pitchers, all in the same balletic contortion, are all about the pleasure of looking
columns

Page Two: The Business of America

Plato was an amateur wrestler, NASCAR inspirers were amateur bootleggers, and the characters in Twin Peaks were amateur coffee addicts: 216 cups (to go with their 42 slices of pie)

Tax Return – Can I Get an Extension?